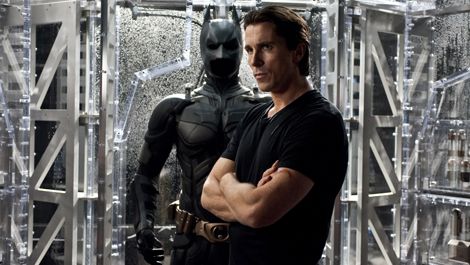 Luckily for everyone, there aren't many points of comparison between The Dark Knight Rises and Batman & Robin . But Christopher Nolan's epic and Joel Schumacher's epic fail do share something: scenes where you truly feel the love between Bruce Wayne and his ever-faithful butler Alfred.

Of course, Nolan's are a bit more understated. But they're the heart of the film, in a film with heart - not necessarily the first virtue you associate with the bedazzling Brit.

And yet, gruff, gritty and gothic though it is, TDKR may bring a lump to your throat that isn't popcorn-related. Its chief summer challenger Avengers Assemble may have bigger zingers, but this has one thing Whedon missed: emotional engagement; a genuine sense of jeopardy; deepening human drama. (OK, three things.)

Meanwhile, it also breaks from the Nolan norm in getting to grips with key, charismatic characters who aren't all blokes.

But before we let the cat out the bag, we want to make something clear: this is a Batman movie that's all about Batman. Where the previous chapter ceded the spotlight to Heath Ledger's movie-thieving Joker, this shifts it back on to Bruce as he faces his toughest mission yet: retirement.

"There's nothing out there for me," he mopes, eight years into self-exile following the dark night he took the rap for DA Harvey Dent's crimes.

Holed up in a rebuilt Wayne Manor and hollowed out, this is the most adrift we've seen the character on screen. (He's going grey, too.) Weighing a return to action against taking a new path, Bruce and Alfred debate Batman's future in tense, tender exchanges. You're hooked, and the fighting hasn't even started.

After a Bondian skyjack opening already familiar to Imax viewers of Mission: Impossible – Ghost Protocol , Nolan goes small and noiry, a case of stolen pearls opening the door to deadlier misdemeanours. Before long, the movie's massive.

The director and his co-writer/younger sib Jonathan have cooked up their most ambitious scheme yet, bunging faith, idealism, social revolution (via Charles Dickens!) and a combustible crisis that could backbone an entire season of 24 into the blender.

As the scale and stakes balloon, Nolan maintains taut control; if anything the storytelling coheres sharper than The Dark Knight . The trick lies in holding fast to what he - and we - care most about: the cost to a (Bat)man's body and soul. This time, it's painfully personal.

Lest this all sound itchily introspective, rest assured: there's a ridiculous amount of cool shit here. "Boy, you are in for a show tonight," drools a fat copper as the Bat-pod burns back onto Gotham's streets, new tricks up its wheels.

There's also a rumbling return for the Tumbler(s), plus magnificent flying machine The Bat. Fanciful but functional, the latter's a winged symbol of what's best about Nolan's Bat-verse: the intelligently heightened realism that lets us buy the idea of a city enslaved by a half-naked muscle-man in an S&M mask. Particularly when he's played by Tom Hardy, whose Bane is a virile mix of brawn, brains and Brian Blessed (those filtered vocals proving mostly legible).

A bit camp? Wait till you see the fists of fury he lays on Bats in the film's smarting centrepiece.

The other new recruit from the costumed canon, Anne Hathaway's cat-burglar Selina Kyle (never referred to as Catwoman, unless our ears deceive us), also strays from kitsch. She's a bundle of spiky fun though - not a tragic misfit a la Michelle Pfeiffer, but a wily grifter nuanced enough in Hathaway's hands not to seem like she's just there to add a sexual frisson. Though she does that, too.

Top to toe, it's an ace ensemble, no one forgettable even if on screen for seconds here and there (hello, Matthew Modine). Joseph Gordon-Levitt essays solid, un-dull decency as honest cop John Blake, while Bruce's holy trinity of father figures - Gary Oldman, Morgan Freeman and moist-eyed Michael Caine - are at their warmest and sagest.

And Christian Bale? Never more vulnerable, likeable or willing to get his gloves dirty, pushing to new emotional depths for his final Gotham go-around.

And yes, it is The End, a resounding resolution for what Batman Begins begun. Threads from that film are picked up, lengthened and strengthened, bringing a staunch integrity - in every sense - to the overall arc.

Is it perfect? Factor in some clunky catch-up exposition near the start, a cringey log-fire love scene and moments where Hans Zimmer's score nearly foghorns the actors off the screen and the answer's no.

An even bigger question: is it up there with The Dark Knight? Not quite. The Joker in the pack still gives part two the edge. But there's no shame in coming second to Nolan's Michael Mann with masks masterpiece.

And rather than replaying it in your head, you'll be busy agog at Wally Pfister's cinematography (the harsh beauty of the city under snow); the seamless interweave of genres (police thriller, disaster movie, psychodrama); how Nolan implies brutality without riling the censor; or the equally sly way he slips in possibly controversial elements from the Bat-mythos without risking outrage.