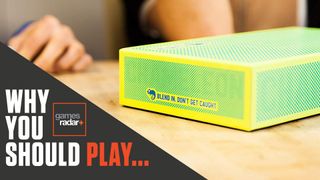 With Christmas looming and family get-togethers on the horizon, The Chameleon board game is pleased to make your acquaintance. And honestly, it's got all the makings of a festive classic. It's quick, everyone can get involved, and there's all the backstabbing you could want (as with all the best board games, I'm sure you'll agree). So put your tired old copies of Cluedo to one side; this is a much better mystery for the holiday season, and it's infinitely more brutal. Just remember to bring your best poker face with you - you'll need it.

The Chameleon board game from Big Potato Games is all about bluffing. Things kick off with a table full of words that belong to a particular topic - fairy tales or hobbies, for instance - and one is chosen at random by dice roll. Most players will know what that word is thanks to the special decoding card they were given at the beginning of the turn. They must then think of a related word to prove they're in on the secret (so if you got 'dragon', you might say 'scales'). But you can't be too obvious. That's because one unlucky soul, The Chameleon, has been left in the dark. And there's the hook; nobody knows who The Chameleon is, only that there is one. As such, everyone then starts arguing over who they think the culprit is. If you successfully catch The Chameleon without them realising what the original word was, everyone else gets a point. Meanwhile, The Chameleon gets the point instead if they figure out what the word was and/or they manage to stay under the radar. Cue a load of hasty excuses and throwing each other under the bus. It's a straightforward but fun idea that sees you lying your heart out to avoid detection.

The skill of The Chameleon comes from choosing a word that's suitably vague, yet not 'out there' enough for your teammates to begin doubting you. When you're under pressure and other players are watching your every facial expression, that's harder than it sounds. Similarly, The Chameleon must keep a straight face even as they desperately try and come up with a word that could apply to damn well anything on the topic board… before capitalising on any weakness from their foes. It's wonderfully devious, and because each round can be finished in under ten minutes, it's not a big commitment.

It says a lot that my only criticism of The Chameleon board game is also its main selling point - lying. If you're like me and find it hard to tell fibs without cracking up, you'll experience extra pressure. It significantly ups the difficulty, too. However, if you're a fan of bluffing or deduction games? This will be right up your street. Having to make stuff up on the fly and convince others you're not completely full of s*** is a blast, and it leads to some hilarious moments.

Generally, this board game is the epitome of what makes Big Potato products so appealing - it's quick, easy to understand, and just a little bit devilish. It's also very replayable, so there's no reason why you can't still be lying through your teeth this time next year.

The Chameleon board game ($34.69 on Walmart)
You can get your hands on The Chameleon right here. If you're in the UK, it's available via Amazon here.View Deal