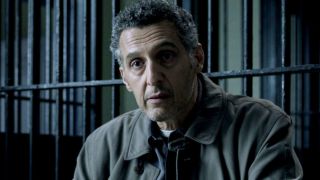 John Turturro has been cast in The Batman to play crime boss Carmine Falcone, director Matt Reeves has confirmed. Turturro joins the cast led by Robert Pattinson as the Dark Knight himself, Zoe Kravitz as Catwoman, and Paul Dano as Riddler.

Reeves continued his three-series trend of confirming cast to The Batman by posting gifs to Twitter, previously confirming Jeffrey Wright as Commissioner Gordon and Andy Serkis as Alfred Pennyworth.

Turturro is a veteran actor with almost four decades of experience in film and television, best known for The Big Lebowski, O Brother, Where Art Thou?, Secret Window, and two Transformers movies; Dark of the Moon and The Last Knight. My personal favorite Turturro role is the lawyer John Stone in the excellent and underrated HBO series, The Night Of.

Carmine Falcone, AKA "The Roman," is an influential mob boss and enemy to Batman. He was portrayed by Tom Wilkinson in Batman Begins and John Doman in the TV series Gotham. Falcone was a minor antagonist in Batman: The Telltale series.

With The Batman's June 25, 2021 release date still a ways off, we don't have a lot of plot details aside from what we can gather from confirmed characters. We know Dano's Riddler and Kravitz' Catwoman will likely cause a lot of trouble for Pattinson's Batman, but we're still waiting for a trailer (or at least a teaser) to confirm anything new.

Now's the best time of year to upgrade to a new TV, and we'll be picking out the best Black Friday TV deals all throughout the dollar-saving season.