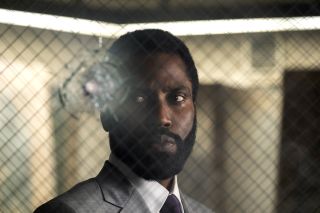 Tenet, the new movie from Christopher Nolan, is arriving in cinemas in July 2020, and as of right now, very little is known about it. A brief teaser trailer was released in cinemas only with Fast & Furious: Hobbs & Shaw, but it never found its way online.

Well, we now at least have a new image to sate us. As featured in the upcoming 2020 Preview of our sister publication Total Film magazine, the new shot (above) features sharply dressed star John David Washington (BlacKkKlansman) inspecting a bullethole in a window.

Joining Washington are Elizabeth Debicki (Widows) and future Batman Robert Pattinson in similarly undisclosed roles. They’re all Nolan newbies, as are other cast members Dimple Kapadia, Aaron Taylor-Johnson and Clémence Poésy. The only veteran Nolan players of the cast are Kenneth Branagh (Dunkirk) and Michael Caine (a Nolan lucky charm since his Batman Begins days).

Tenet is very vaguely described as “an action epic evolving from the world of international espionage,” but given that this is a Nolan movie, that description is probably barely scratching the surface. Pattinson has called the script “unreal”.

The film’s official teaser account recently sprung to life with a spinning video of Tenet’s title treatment. Check it out below. A sign that more info will be on the way soon? Only time will tell.

Tenet opens on July 17. For more on the most anticipated films of next year, check out the 2020 Preview issue of Total Film magazine, which hits shelves on December 20. Also included with the issue is a huge Review of 2019, rounding up the best films and must-see moments of the past 12 months.