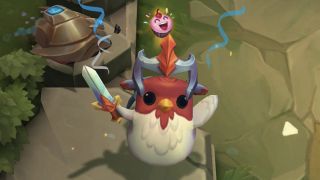 Teamfight Tactics has been a latecomer to the Autochess craze, but it’s definitely taken the scene by storm. However, if you’re a total newbie to the League of Legends universe, wrapping your head around this game mode can be a mission and a half. Check out our handy beginner’s guide to Teamfight Tactics. We’ll break down the basics, explain how the characters work, and also give you some handy tips.

Teamfight Tactics - How to Play

Before you even think about slapping on those Teamfight Tactics training wheels, you’re going to need a League of Legends account. While the game mode is distinctly separate from the primary MOBA experience, that account is your golden ticket to accessing it. Once you make an account on your chosen server and get the client downloaded, you’ll be away.

Once you’ve logged into the client, click on the Teamfight Tactics tab at the top of the homepage which will let you queue into a game mode, and also show you any relevant weekly missions. You can queue for Teamfight Tactics with people on your friends’ list, or you can go at it solo. The game mode is still in beta, which is why there might still be some kinks that need ironing out but you should be able to find a match without any issues while this Autochess variant is still hot. The fact that it’s now a permanent League of Legends game mode should make matching up with other community members even more of a cakewalk.

If you’re not someone that’s familiar at all with the Autochess genre, then Teamfight Tactics may be a bit to take in. At its core, this is an 8-player fight to the death which pits you against your opponents in a series of battles on a grid, with League of Legends champions as your chosen heroes. You have to arm your champions with appropriate weapons, team them up with other champions that they work well with, and make sure that you’re keeping them as safe as possible from the other side.

Where does the Autochess part come in? Well, outside of arming your champions, picking your team comp, and making sure that everyone’s standing in the right place, the rest of the proceedings are automated. That’s right; you’re going to have to watch your army slug it out without your input once the going gets tough. Players’ teams will go head to head like this until a victor emerges.

You get to position your champions on a grid and you’ll go head to head with a single opponent until a victor emerges. This occurs over multiple rounds, and the end of each round will net you gold to spend on souping up your champions for future rounds. Each Teamfight Tactics stage will also give you time to spend that gold on buying new champions, or to give you the chance to get a free champion. The champions available for purchasing will depend on your Player Level, and you can upgrade a champion in your employ by acquiring three of them during the match. This processes raises the champion’s level and makes them much more useful.

While there are certain formations that will serve certain team compositions better at different points of the game, the basic rule of thumb that you’re going to want to remember as a newbie is to make sure that you’re setting your team up in one of the far corners.

The clue is really in the name when it comes to Teamfight Tactics. This is about utilising your champions in a team, and making sure that they accomplish two things: 1) staying alive for as long as possible, and 2) killing enemy champions as effectively as possible. To do that, you’re going to want champions that can do damage and champions that can protect the others who are doing damage. You’ll also want a good mix of melee DPS champions and ranged DPS champions to ensure that you’re hitting as many enemies as possible. We’ll go into the champions and some role examples below, but generally you want to make sure that tank champions go in the front to soak up enemy damage. After that, you want your melee damage champions to whale on the other tanks, followed by your ranged damage champions sitting pretty in the backline.

Every once in a while, you and your opponents will be able to draft new champions. This helps make sure that the going doesn’t get too tough if you’re falling behind: the draft order favours those who haven’t been doing so well, and getting the first pick of a powerful champion can easily turn the tide for you. Having the chance to make sure that all of your champion Origins and Classes work well together is really the key to success. This is a game about staying power!

Currently, Teamfight Tactics doesn’t utilise the entire League of Legends roster of champions. However, there’s a fair few familiar faces in there so if you’re new to Teamfight Tactics but you’ve played League, then you’ll definitely have a handle on how things work. For everyone else, there’s this handy above cheatsheet prepared by ex-pro Scarra which groups different champions together and gives you some basic information about their Origins and Classes.

Champions of the same Origin have bonuses when you keep them in a team together, while their Classes will determine the type of role they play in your squad aka where you place them on the battlefield. This sheet hasn’t been updated to reflect the new 9.15 patch yet, but the general information about classes and origins is still useful if you’ve got absolutely no way to tell Aatrox apart from Anivia.

You’ll be able to see from the sheet above that the champions currently available have synergies based on their Origins. Each Origin type delivers a different kind of synergy, which improves in potency as you collect Champions of that same origin in your party. For example, collecting Pirate champions like Gangplank and Miss Fortune will mean that you’re earning extra gold after fighting against other players, and this number goes up if you have at least 3 Pirates in your team. On the other hand, stacking Void champions means that you will do true damage, which will ignore the resistances of the enemy champions. You’re going to want to make sure that your team has a good mix of Origin synergies depending on the playstyle that you think suits you: do you want to be farming gold to Smaug your way to victory, or is your chosen weapon stalling out by having a team that’s immune to certain types of damage that your opponents might favour? There’s many ways to win, and building the right team is often a mix and match game until you find a method that clicks.

As mentioned, keeping an eye on Class synergy is also important, especially because it’s a bit of a balancing act between having a defensible team composition but also one that’s going to take down your enemies the quickest. It’s all very well and good to stack Assassins because of the buckwild critical strike damage increase that gets you, but they may not live long enough to actually be any good without some frontline tank to protect them. In that particular instance, Guardian Class champions are good for increasing the armor of adjacent champions while Knight Class champions block damage for your team regardless of its type. In both cases, you’re going to want at least two champions from either Class for that synergy to kick in, so that’s one less slot for a damage dealer.

There are some things to keep in mind when it comes to TFT when you’re a beginner, and making sure that you have these basics down will better enable you to dive into the nitty-gritty details later.

One thing you always want to be thinking about is intelligently spending the gold that you earn. Don’t just blow it all on one champion if you think your roster is lacking from one round to the next; each opponent will bring something different to the table in most circumstances. It’s cost-effective to upgrade champions organically, and if you’re rolling in dough then a better use of that money might be actually to deny valuable champions from your opponent by buying them out and selling them when you don’t need them anymore. Remember, this is an endurance game, and you can save money in tons of little ways such as skipping initial rerolls at the start of your TFT match before you can accurately predict how other people are going to build their teams.

It’s also good to remember that things can change drastically for you from stage to stage. Each draft stage is a new opportunity for a do-over in a way, and as we mentioned, lagging behind means that you just get to pick champions sooner in the next draft phase so it’s not all doom and gloom. Make sure that you go into each stage with a clear strategy of some kind about what sort of Origin and Class combination you want; you’ll have had some time to see what your opponents are employing as their chosen styles, so take note of what Origins and Classes they have in order to prep the most efficiently. Observe your enemies and don’t get cocky if you’re pulling ahead!

There’s plenty to keep an eye on in TFT once you get the hang of things, but our beginner’s guide should help you jump into things and figure out how you prefer to crush the competition. Once you’ve got that sussed out, half the battle is won. Riot has announced some upcoming patch changes already and that TFT will become a permanent game mode, so check back to see what the future will bring for the meta.