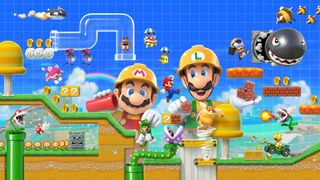 After blowing Nintendo fans out of the water with incredible building tools in the original Super Mario Maker on Wii U, players can dive in and build their own Mario levels all over again in Super Mario Maker 2.

Unfortunately for some of the more driven Mario maker fans, Nintendo has limited the amount of levels you can have uploaded at one time. Reddit user DirtyTVDoneDirtCheap found that you can only upload 32 levels at one time with "no way to increase that."

The original game let players upload 10 levels when they boot the game up but let increased that cap as players earned more stars. The max upload limit was 100.

Another Reddit user had a theory as to why Nintendo is limiting the amount of uploads per player. "My conspiracy theory is that Nintendo are doing this to decrease load on their servers." said user EnjoyingYourself. "They know that there will be a significant number of people that will only play this game for a few weeks and them never touch it again. But even if those players stop playing the game, they still need to have their levels saved on their servers, forever."

32 levels is still a lot for a player to design, but passionate players who use Super Mario Maker as a creative outlet are a bit bummed. Hopefully we'll see an update with a higher limit later in Super Mario Maker 2's lifetime.