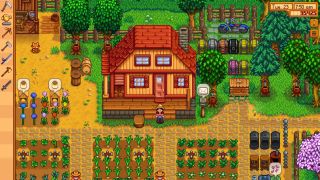 Stardew Valley creator Eric "ConcernedApe" Barone is working on multiple new games, including a non-farming game set in the world of Stardew Valley.

"I'm actually working on a couple of new projects," Barone said to an inquisitive fan on Twitter. "One takes place in the world of Stardew Valley, but is not a farming game. The other, I'm not 100% sure about the world yet, but it will tie into Stardew Valley in some way."

Barone initially teased a new game set in the Stardew world in late 2018, shortly after he transitioned from being a solo developer to leading a small team. However, this is the first we've heard of it not being a farming game, and the separate Stardew tie-in is also totally new.

"I've been deliberately secretive about it because I want to be able to work on it without any pressure for the time being," Barone said in December 2018. "I also want to make sure the concept is fully realized before revealing anything, because once it's out there, I'm going to have to fully commit to it. I'm a pretty cautious person when it comes to this sort of thing."

Barone didn't offer any further details, so we don't have much to go on at this stage. Will this mystery game be set in Pelican Town itself, or just the same world as Stardew? Besides that, just knowing that it's "not a farming game" leaves things wide open. The Stardew Valley universe could conceivably support a wealth of genres, from a full-fledged dating sim to a To The Moon-style visual novel, or perhaps an action-RPG that fleshes out the game's dungeon-like caves and mines. Or, I don't know, a kart racer. Screw it, why not? And we haven't even gotten to Barone's other project, which is equally fertile ground for speculation.

While we wait for more details, here are 10 reasons to be excited for Witchbrook, a Harry Potter-style magic school sim from Stardew Valley publisher and indie studio Chucklefish.