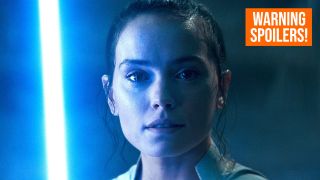 Star Wars: The Rise of Skywalker has blasted into cinemas with a resounding thud. This, the caper to the trilogy of trilogies, is... not what anyone expected. There are plenty of thrilling moments, some lovely callbacks, but also multiple baffling decisions that over-complicate the story and have us questioning the apparent three-movie plan J.J. Abrams started with in Star Wars: The Force Awakens. And while there's certainly no single person to blame for the arguably disappointing ending, there is one decision that’s been overegged, underserved, and concludes scrambled: Rey's parents.

SPOILER WARNING! Do not read on unless you have seen Star Wars: The Rise of Skywalker. We are going into major spoiler territory.

Star Wars: The Last Jedi made the case for Rey’s parents being "no-one". Well, it didn't exactly make the case – it explicitly told us that Rey's mother and father were nobodies who simply abandoned their child. This fact completely changes the Star Wars mythology. Rather than relying on a family name to have Force powers, Rian Johnson’s movie demonstrated how anyone – even a lonely scavenger, abandoned by her parents – can stand against an evil empire and inspire hope. The final shot, of that boy using the Force to pick up a broom, doubled down on this. The Skywalkers may be the namesake of this saga, but they’re not the only ones with the Midi-chlorians to wield a lightsaber.

The Rise of Skywalker undoes all this. Turns out, Rey’s power does not come from her survival on Jakku, but from her grandfather, Emperor Palpatine, the villain of the series. There was no inkling this would be the case – we’re simply told this fact with some clunky dialogue that retcons The Last Jedi’s “your parents were no-one” remarks. Rey's dad, as revealed by Kylo, was actually Palpatine’s child on the run. And Luke and Leia both knew the whole time? That's apparently the case.

This creative decision is hard to swallow. To say there were eye-rolls in my cinema is an understatement. I witnessed people’s hands covering faces. Admittedly, the person behind me audibly gasped, but the overall reaction was so far from the groundbreaking revelation of Darth Vader being Luke’s father, the two movies may as well have been set in completely different distant galaxies.

What went wrong? First off, The Last Jedi’s clinical explanation that Rey’s parents were nobodies – a revelation that was a success with many fans, though controversial with others – made the question of who are Rey’s parents feel completely redundant. We know they were nobody! We’ve had two years stewing on the fact that there are hundreds of Force users out there who are not Skywalkers, Windus, or Baby Yodas. The Force flows through orphans, scavengers, and the best of us.

The Rise of Skywalker tries to deal with the fallout of The Last Jedi’s big reveal by making Finn Force sensitive. The former Stormtrooper has something he wants to tell Rey that’s never revealed, and I believe that Finn wanted to reveal his connection to the Force. It’s a neat piece of mind-canon that ties that together.

Then, there's the issue that Palpatine being Rey’s grandfather takes away from the Emperor’s presence in the movie. The biggest villain in a galaxy far, far away – one who has terrorised cinemagoers for over 40 years – is only now searching for his granddaughter? Surely, this would have been something Palpatine dealt with some time ago? And, more to the point, surely there would have been some inkling in the previous eight movies that would hint that Palpatine has a granddaughter?

In the end, Rey's parents' part in The Rise of Skywalker feels like an unnecessary apology for showing us, in The Last Jedi, that anyone can use the Force – that you don't need to be the "chosen one" to be an important part of this saga. And while I enjoyed Episode 9 for the most part (Babu Frik! Lando! Luke and Leia training! Han! That Reylo smooch!), this was one revelation that clanged with me. Rey could have been nobody, and that would have worked perfectly.