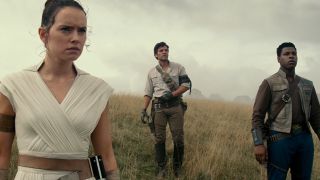 LucasFilm head Kathleen Kennedy probably thought J.J. Abrams was a safe pair of hand to replace Colin Trevorrow on Star Wars: Episode 9. However, with Star Wars: The Rise of Skywalker, Abrams directed arguably the most polarising Star War movie yet, causing more heated discussion amongst the fandom than even Rian Johnson did with The Last Jedi.

Since The Rise of Skywalker’s release, we’ve witnessed a swirling gyre of interviews and Twitter hashtag campaigns that have given rise to rumours of a fabled J.J. Abrams cut: an alleged three-hour version of Episode 9 that exists, frozen in Carbonite, somewhere in Disney’s vaults.

The initial rumblings of the so-called "J.J. Cut" were started by a Reddit user, who claimed they knew someone (presumably a Bothan spy) on the inside. But what's the actual likelihood of there being a totally different version of The Rise of Skywalker being left on the cutting room floor, like Ponda Baba's arm in the cantina? And if it exists, what’s been annexed from the movie for the theatrical cut? Let's get down to brass (or Hasyian smelt) tacks of the alleged J.J.Cut.

Warning: As you may expect, spoilers for Star Wars: The Rise of Skywalker below.

The evidence for a J.J. Cut of Star Wars: The Rise of Skywalker

Where there's smoke, there's fire, and you can't get much smokier than an actor or writer mentioning a Director's Cut. Here's what we know was cut, based on interviews from key players.

The Battle of Exegol scenes

As GamesRadar+ previously reported, Beaumont Kin actor Dominic Monaghan told The Hollywood Reporter that he was "hoping for a director's cut so we'll get to see more and more of the stuff that was filmed." He alludes to a scene involving him, Kelly Marie Tran's Rose Tico, and Billie Lourd's Lieutenant Connix where Connix injures her leg during the final battle at Exegol. “Obviously, myself, Rose and Connix are exiting the battle, and Rose has a weapon," He says. "While Rose is busy doing stuff, I grab Connix’s arm and put it over my shoulder to make sure that all of us come back as unscathed as possible.”

Monaghan also discusses how much of his character's backstory was left behind during edits, saying: "One of the things about my character that was a little bit more established — in terms of everything that we filmed — was that he was a code-breaker, Beaumont. So, a lot of the information that had come to our heroes had come through Beaumont.”

In early December, as GamesRadar+ pointed out, behind-the-scenes footage dropped that may show part of the cut scene. Jump to 03:20 in the video below - doesn't that look like Lourd is getting her leg wrapped between scenes set on Ajan Kloss, the homes of the Resistance base? That's likely right before they shot the celebration scene...

Then we have Chris Terrio's chat with THR, where he implies that some of Rose Tico's scenes were "regrettably" cut because of the need to produce a "standard of photorealism" for Carrie Fischer's Leia Organa. "There were a couple of scenes that we shot with Rose that I wish had made it to the final cut,” Terrio says. “But it's the nature of the process that certain scenes fall out of the film, and I very much respect the difficulty of the decisions J.J. had to make — especially given that I know for a fact that J.J. adores and respects Kelly and would have loved to keep every second he shot with her in the film."

Long-time J.J. Abrams collaborator and editor Maryann Brandon spoke to The Huffington Post about how they were going to re-introduce Palpatine. “It was kind of a delicate balance and went back and forth a lot about how much we wanted to reveal,” she says. “Some scenes changed quite a bit, the way that we wanted to present it to the audience. In the end, we ended up showing a lot less of it than we started with.” According to Brandon, there was originally more information about how Palpatine was still alive, but "it seemed to go off topic." Instead, we got it exclusively in Fortnite.

As ComicBook.com points out, Richard E. Grant and Domhnall Gleeson were meant to be in the film's opening scene. During an interview filmed before the movie's premiere, the two opened up about always shooting in studios except for "the one time we weren't in the studio it got cut," Gleeson says. Grant quickly chimes in, saying: "One time we were in a battle scene in a forest, with Kylo Ren. Our bits got cut out, so we'll have to wait for those on the extras."

The two are clearly referencing the opening scene on Mustafar (even though we didn't find out it was Mustafar until the visual dictionary dropped), where Kylo fights his way through a forest to find the Sith Wayfinder. Perhaps there was going to be some exposition explaining where they were?

Why there's probably not a J.J. Cut of Star Wars: The Rise of Skywalker

If we were to make the fatal error of taking a Reddit post as gospel, that means its contents should be verifiable by other people. And while anonymous sources can't do that, a prominent figure who worked on The Rise of Skywalker's production could. Except, they haven't yet.

In fact, we have proof to the contrary. The alleged leak claims that, during film's finale, when Rey is facing off against Palpatine after Ben Solo (seemingly) dies, a group of Jedi Ghosts were meant to appear. In the final movie, the voices of Luke Skywalker, Anakin Skywalker, Obi-Wan Kenobi, Qui-Gon Jinn, Mace Windu, Yoda and more, urge Rey on. Yet the Reddit poster claims they were all meant to appear in full costume and would serve as a sort of barrier between Rey and Palpatine. (This all sounds very Harry Potter.)

Speaking to Yahoo Entertainment, visual effects supervisor Roger Guyett suggested "that an on-screen cameo by Anakin Skywalker's Force Ghost was never in the cards". For Guyett, we were always meant to hear Hayden Christensen's voice, as it's a "really fabulous moment".

Is there a Star Wars: The Rise of Skywalker Director's Cut?

The truth likely lies somewhere in the middle. Every film leaves footage on the cutting room floor for a myriad reasons: time, continuity, budget, etc. The Digital HD edition of Star Wars: The Last Jedi, for example, includes an extra 14 deleted scenes with audio commentary. And that film finished production months in advance, while The Rise of Skywalker production team struggled with the truncated schedule, according to editor Maryann Brandon.

Monaghan's likely telling the truth about his scenes that were cut from the final film, and Terrio wouldn't set himself up for unnecessary ire. But two people discussing deleted scenes does not mean a three-hour alternate cut exists. There may very well be a traditional director's cut, with a handful of scenes that didn’t make the theatrical version but are lovely to watch afterwards. There’s realistically not a "J.J. Abrams cut" that drastically shifts the film's narrative. Sorry.

Many fans have drawn a comparison between The Rise of Skywalker and Zack Snyder’s Justice League. The infamous hashtag #ReleaseTheSnyderCut has done the rounds on Twitter a half dozen times, with some of the movie's actors even getting on board.

However, directing duties on Justice League were handed from Snyder to Joss Whedon after the two filmmakers worked in tandem for a brief period of time. Whedon was brought on by the studio to help before Snyder left due to personal reasons. The Rise of Skywalker was made entirely by J.J. Abrams, and therefore likely had majority creative control until the very end (though Justice League was notably co-written by The Rise of Skywalker’s Chris Terrio).

What the Star Wars: Rise of Skywalker Director's cut could look like

If there is a Star War: Rise of Skywalker Director's Cut, we won't see it until the film's digital release, if at all. The few corroborations we do have regarding deleted scenes means we could get more time on Mustafar, more Palpatine backstory, and more Rose Tico. The Mustafar scenes might even include Darth Vader's castle, as The Star War: Rise of Skywalker Visual Dictionary tells us: "Kylo soon outpaces his stormtrooper escorts as he cuts a swath of destruction through the Alazmec who attempt to block his path to Vader’s castle — or rather, its crumbling ruins."

The deleted scenes may also delve deeper into Beaumont Kin's history of helping the Resistance and Palpatine's methods of staying alive for so long. Would they fill perceived plot holes? Maybe. We'd still have instances where the novelization of the film confirms a classic character's death, and the official visual dictionary tells us stuff we should already know (like Jannah is Lando Calrissian's daughter?!) but at least we would have more Star Wars. Which is a good thing… Right? Right?!

In short, however you feel about Star Wars: The Rise of Skywalker, it's safe to say that a totally different movie doesn't (and shouldn't) exist. J.J. Abrams made a film, and it's the final film in the Skywalker saga. No amount of deleted scenes will change that, or its contents. And if you feel like it has somehow failed you, just turn to Master Yoda, who reminds us "the greatest teacher, failure is."

Need more Star Wars in your life? Then find out about all the upcoming Star Wars movies.