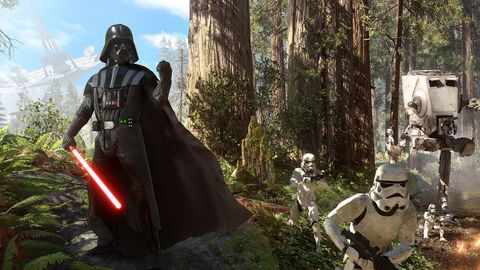 A beautiful recreation of Star Wars, and a solid if simple shooter. This is a game you'll love intensely albeit for a short space of time.

I'm on Endor. As I push through the foliage, red and green blaster fire erupts around me, and some Rebel scum zooms past on a stolen speeder bike, taking pot-shots at my squad mates. An AT-ST struts alongside me, trampling trees and unleashing a stream of fire that reduces the speeder bike to a cloud of sparks, smoke, and hot metal. Overhead, Ewoks scurry through the canopy, and although I take aim and try to shoot them, they quickly bolt into a nearby treehouse. I lob a Thermal detonator at a passing Twi'lek and it sends her flying through the undergrowth. The noise, the look, the feel - this is the most wonderfully accurate, brilliantly recreated Star Wars experience ever. I'm on the goddam-forest-motherf***ing-moon of Endor.

That's Battlefront's finest feature. As a Star Wars game this is unparalleled: a slavish recreation of the original trilogy (there's no sign of any prequel stuff here, at all), polished to an authentically late '70s - early '80s sheen. Every vehicle, character, blaster, and planet is just-so, smartly created to not only withstand thorough scrutiny from any dedicated Star Wars enthusiast, but also to work coherently within a well-balanced, AAA shooter. And this is an entertaining FPS, although not one that will satisfy the demands of hardcore players. The slavish recreation of George Lucas' grand sci-fi opera comes at a price - it needs to be as accessible as possible, a game for everybody to enjoy. As such, some will find the Battlefront experience a little limited.

Shooting here is incredibly stripped-back and undemanding. You point, you shoot. Doesn't matter if you're running and hip-shooting - your blaster accuracy remains the same as someone who is stationary and aiming down their sights at you. There are no revives, no special abilities (outside hero characters), no double-jump even. This is a game designed to make players move, to experience everything on offer, and not to settle or specialise for a specific class or role. It's incredibly refreshing, but anyone who has spent 1000 hours grinding a character in Destiny, or who loves to tinker endlessly with their loadout in COD, will find it overly simple and painfully... fair. Battlefront is specifically designed to welcome players of all capabilities with open arms, and it gives them the tools to score just as many points as the hardcore.

That's entirely the point, though, because this is more a Star Wars simulator than a traditional first-person shooter. You're here to immerse yourself in the universe you love, to be a part of it, to experience it with your friends, not to be cannon fodder for xxBiffLord69xx who can headshot you across the map with his super-advanced, heavily modded sniper rifle. Battlefront is precision engineered to squeeze your nostalgia gland dry ... sometimes to its detriment.

The selection of blasters, for example, is hugely limited and very few weapons feel particularly different to the rest. They all have 100% authentic names too, like the E-11 rifle - hardly guns you'll form a great attachment to, even if they look and sound spot on. Star Cards, which are the pre-set power-ups you'll take into battle, are rather basic and precisely created to feel like part of the Star Wars universe. The net result is that there's no single loadout that'll give you an advantage over your opponents, and no combination of armaments that feels out of place on a galactic battlefield.

What about those battlefields? There are 13 maps in the game, split across four planets: Hoth, Endor, Tatooine, and Sullust. Each is perfectly suited to the specific modes they feature in and, yes, they're all delightfully accurate, containing some neat little Easter eggs for fans to hunt down, like the Wampa lair on Hoth and the Jawa caves on Tatooine. While smaller arenas could be mistaken for reskinned versions of generic shooter maps, the real standouts are the massive play areas that host the 40 player modes like Walker Assault and Supremacy, because they offer up the 'full Star Wars experience': vehicles, hero characters, multiple areas, and the grand scale that allows full-on aerial combat. These larger areas are mostly well designed too, offering enough cover and tighter, indoor areas to make sure regular grunts don’t feel out-muscled by vehicles and special characters.

In fact, there's a real gulf in entertainment value between the bigger and smaller modes. Walker Assault is the standout because there's always so much happening; so many roles to play, and such a varied selection of options for scrapping. As the Imperials, it's your job to protect your AT-AT division through three phases of combat, keeping them standing long enough to destroy the opposition base. As the Rebels, it's your task to stop them by defending uplinks long enough to call in Y-Wing bombers. Odds are still stacked in favour of the Imperials on this mode, but that makes Rebel victories all the sweeter.

What Walker Assault does is combine everything in a single, massive battle, and it's all the better for it - win or lose, you'll have a bloody brilliant time because everyone contributes in some way. Throw in that authentic score, which boldly stirs your emotions as you push for victory alongside your buddy, and it's an experience few other games can ever hope to match.

Outside Walker Assault, Fighter Squadron (just aerial combat), and Supremacy (which is essentially Battlefield's Conquest mode - teams of 20 fight to occupy and hold five objective areas), the other modes are fairly similar, and expose the shallowness of the combat. Fewer players on a map, without the variety afforded by vehicles and multiple objectives, means you're restricted to pure shooting and the rather limited power-ups. Not only that, but you're less likely to experience those epic Star Wars moments, which really sucks the magic from the game. Personally, I enjoyed Droid Run, but only because I found endless entertainment watching the little fellas strolling around honking “Gonk” at me.

Sadly, hero and villain characters (who do appear in some smaller modes) are one of Battlefront's few shortcomings. Not only do most of them sound a bit wrong, as if they were voiced by your mate who does a Darth Vader impression in the pub by talking into a pint glass, they're also little fun to actually use in battle. Swing a lightsaber as Luke and it never really feels like you're connecting with your enemies, leaving what should have been an empowering aspect of the game incredibly underwhelming. Worse, duals between Jedi or blast battles between Han and Boba Fett (during Heroes vs Villains) are more a question of hammering the attack buttons and spamming abilities until one of you falls over. On the flip-side, taking out a hero or villain as a grunt is an exercise in attrition, and on more intimate maps you can expect to die frequently and frustratingly.

Multiplayer is very much the meat of the game, with nine dedicated modes, but there are solo and offline options. However, you'd be foolish to try and play Star Wars Battlefront truly alone, as these game types are more tuned to co-op than lonewolfing. Here the standout is Survival, which is you (and a buddy) facing off against 15 waves of enemies. Sure, you've played horde modes before, but Battlefront spices up the formula by adding things like vehicles, drop-pods containing power-ups, and a limited lives system instead of infinite respawns. It's here, rather perversely, that hardcore shooter players will find the most rewards as Hard mode and above are a genuine challenge.

Elsewhere, Training Missions and Hero Battles make up a very stingy single-player offering. Quite simply: if you're not going to play this game online or with other people, don't bother picking it up. Additional content is similarly sparse. There are emotes to unlock, and a series of generic faces to acquire for your character, but there's nothing here that will truly excite Star Wars nerds in the way bonus material should.

A rather pointless diorama shows off the in-game milestones you've hit, and you'll probably look at it once before heading back into Walker Assault and trying to harpoon an AT-AT, while you scream “watch my six, Wedge” down the microphone at your buddy, Alan. This isn’t a game for digging into and exploring - it’s for playing, pure and simple.

Ok, there's still one elephant in the room here, and it isn't playing some kind of space-piano. It's online performance. How does the game actually run? Well, I played on live servers and it was 99% problem-free (only a couple of short-freezes during 15 hours of play), and other members of the GR+ team sampled the Early Access session, which was similarly smooth. In fact, match-making and actually getting into a game is exceptionally quick and easy to do. Once you're playing, matches will just cycle until you quit, and during actual combat respawns are snappy and (mostly) sensibly placed. Technically, Battlefront appears to be incredibly competent at getting you into the action as quickly and effortlessly as possible. Will it change when millions attempt to log-on all at once? If it does, we'll let you know.

This philosophy of getting players involved, and making your whole experience as hassle-free as possible, is the beating heart of Star Wars Battlefront. Rarely has any video game pushed pure, uncomplicated joy so forcefully to the fore. Sure, as a shooter, this can be rigidly simple at times, and does occasionally leave me yearning for something a little more complex and involving because I'm that guy who spent the rest of 2015 playing Destiny. As a wonderful recreation of some of my most cherished childhood fantasies (and you will feel the same, such is its universal appeal) Star Wars Battlefront is an absolute triumph.

A beautiful recreation of Star Wars, and a solid if simple shooter. This is a game you'll love intensely albeit for a short space of time.