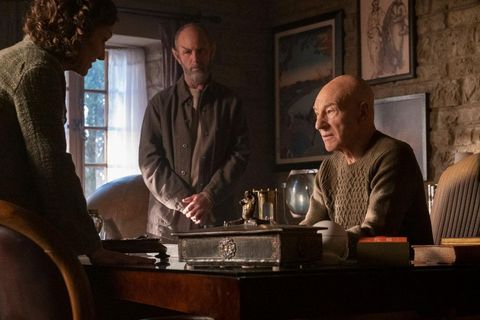 Even though the story gets lost amid the information overload, there’s no denying that Picard is starting to feel like the most relatable of Treks

Star Trek: The Next Generation feels like a very long time ago – and not just because Star Trek: Picard looks incredibly cinematic when compared to the 4:3 voyages of the Enterprise-D. A hell of a lot has happened in the Federation since the Enterprise crew last signed off, and that means we have two decades of events to catch up on.

Season premiere “Remembrance” deftly sideswiped feeling like history lesson by condensing most of the necessary revelations into a TV interview with Picard. This follow-up episode handles things rather less elegantly, however, and can’t avoid coming over like one massive information dump.

“Maps and Legends” is basically a tick-list of the key themes the show will visit over its 10-episode run, hinting at the challenges Jean-Luc Picard will face as the story evolves. There’s a daunting amount of information to assimilate, even for long-standing Trek fans. Newbies, meanwhile, had better start taking notes to help tell their Tal Shiar from their Trill – it’s tiring keeping up.

With the premiere having introduced the mystery of the late Data’s twin ‘daughters’, this follow-up broadens the show’s horizons beyond artificial intelligence. Androids are still a big part of it, of course – the first thing we see is a brutal flashback to the synthetic uprising that laid Mars waste – but the priority this time out is providing key intel on Romulans, the Borg, the Starfleet hierarchy, and even Picard’s health.

On that front it certainly delivers – indeed, nobody could accuse Picard of doing a Lost and keeping all the juicy stuff under wraps. Along the way, Picard’s housekeeper Laris uses her past career as a member of the Romulan intelligence service (and some rather implausible tech) to shed some light on the assassins who murdered Dahj; the upper echelons of Starfleet command reveal they’re connected to some very dodgy Romulan schemers; and Dr. Jurati – who definitely needs to find more facets to her character than simply delivering exposition to Picard – does some digging into the origins of Dahj and her twin sister Soji.

Best of all, we get a hint of what’s going on inside the mysterious Borg Cube that’s fallen under Romulan management. The fact that the former Star Empire is now scavenging the ”reclamation project” for tech they can sell on is a brilliant twist on two of Star Trek’s biggest bads, while the idea some Borg may still be active on board means the Cube itself retains a spooky haunted house vibe – you can’t help thinking those warnings about being careful in the ‘Grey Zone‘ mean that the sign boasting of 5843 days without an assimilation won’t be hanging up for much longer…

The episode’s biggest problem, however, is that it sacrifices the drama of the moment in favour of teeing things up for another day. Even the scene where Picard gets a house visit from his doctor (a former colleague from the USS Stargazer, Picard’s first command) feels emotionally flat. Normally there’d be something tragic about the revelation that there’s an abnormality in the parietal lobe of Picard’s brain that’ll eventually lead to him suffering from some debilitating syndrome (an echo of a plotline in TNG finale “All Good Things”). Here, however, it feels like a plot device added to turn Picard’s mission to find AWOL cyberneticist Bruce Maddox into a race against time – it’s affliction as ticking clock.

Data may be dead, but he could be Star Trek: Picard's most important character

Aside from Picard’s bizarre, in-jokey admission that he "never really cared for science fiction" – it kinda makes sense in context – his emotional meeting with Starfleet’s hostile Admiral Clancy is the only scene that truly delves into his character. She clearly sees him as a has-been, someone who ran away when duty came calling, and their verbal sparring is the episode’s stand-out moment. We’re not used to seeing anyone – enemy or ally – treat the great man with so little respect, and you totally share his frustration as she tears him apart. The pain he feels about the Federation abandoning Romulus in its time of need is very real, and seeing Picard rejected and helpless is quite a shock to the system. An icon like Jean-Luc Picard being forced to go it alone – he refuses to ask former shipmates Worf, Riker, and La Forge along for the ride – is the kind of adversity that great TV shows are made of.

And that’s crucial, because even though the story of this second episode gets lost amid the information overload, there’s no denying that Picard is starting to feel like the most relatable of Treks. It may be set at the turn of the 25th century, but the show’s future Earth looks remarkably familiar, with recognisable cityscapes, and everyday mundanities such as taxis or conversations about setting up digital assistants. It’s also refreshing to see the Federation populated by characters who are anything but the futuristic over-achievers of The Next Generation. This is a universe populated by actual people, where even the Romulans have abandoned their usual uber-stiff personae to come over as humans who just happen to have pointy ears. Crucially, everyone talks like real people. At one point Laris even uses the phrase “cheeky feckers”, posing perhaps the biggest question in the history of the Star Trek franchise: did Romulus have an Irish quarter?

New episodes of Star Trek: Picard appear in the US on Thursdays on CBS All Action, and in the UK on Fridays on Amazon Prime Video.

Even though the story gets lost amid the information overload, there’s no denying that Picard is starting to feel like the most relatable of Treks