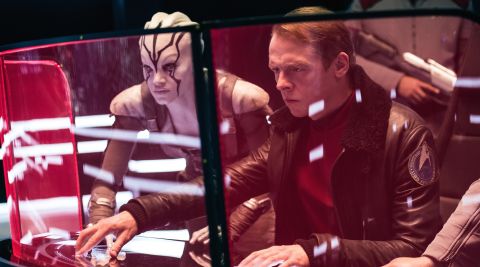 Justin Lin proves a safe pair of hands at the helm of the Enterprise. Powered by a spirited sense of adventure and a nice teamwork dynamic, it’s fun, but not essential, summer viewing.

Star Trek Beyond was, for a short time, a ship without a captain. J.J. Abrams left his post at the helm of the franchise he rebooted in order to take the reins on Star Wars, the sexier of the two leading space franchises. The appointment of Fast & Furious stalwart Justin Lin initially set alarm bells ringing, with concerns fans would end up with a brainless, explosion-packed actioner sporting none of the original series’ philosophical smarts.

Anyone worried that Lin was going to make Trek about petrolheads saying the word ‘family’ a lot can rest easy. Don’t fret about the motorbike sequence - Beyond feels very much like Star Trek. While it fits smoothly with the universe J.J. started, it’s lighter and funnier than Abrams’ movies, with a welcome sense of adventure after Into Darkness’, erm, darkness.

Following Trekkie backlash to the last film (which was critically well received), Beyond distances itself by jumping ahead to find the crew in the third year of a five-year mission. Captain Kirk (Chris Pine) and co are taking a rest stop when a distress call comes in. It’s no spoiler to say that investigating leaves the Enterprise in tatters and the crew scattered on a hostile alien planet. In establishing a standalone adventure, set largely within one sprawling location, Beyond shares more DNA with the original series than its forebears did.

This set-up is the smartest part of the script by Simon Pegg (now pulling writing duties, as well as co-starring) and Doug Jung: splitting up the characters into unexpected pairings opens up the interactions, giving some of the lesser-seen players a platform and reducing the screentime of the Kirk/Spock bromance. It’s actually  the interplay between Bones (Karl Urban) and Spock (Zachary Quinto) that reaps the most rewards, not only for the odd-couple comedy (Urban walks away with all of the film’s biggest laughs), but also because it contains  the closest thing the film has to an emotional moment.

Meanwhile Kirk and Chekov (the late Anton Yelchin, demonstrating his light comic touch) are joined by Kalara (Lydia Wilson) – the alien behind that distress call – in search of the film’s MacGuffin. Elsewhere, Scotty (Pegg) joins forces with native survivalist Jaylah (Sofia Boutella); her ability to multiply herself holographically is just one skill she employs to protect her home. She makes for a cool addition to the line-up, and her monochrome look (think albino with a face tattoo) is striking, but she ends up getting lost in the mix when the team reconverges.

The set-up is so TV friendly, you almost can’t help wishing for weekly adventures for this lot, so individual characters would get more of a chance to shine across multiple episodes.

The sheer number of players on the field means no one gets anything close to a character arc. Uhura (Zoe Saldana) and Sulu (Jon Cho) barely get a look in. We might learn a little more about each of the characters, but their motivations feel arbitrary. Kirk begins the film with an interesting starlog about the struggle to feel grounded during a space mission, but there’s no time for any further introspection once the rip-roaring fun starts.

Where it does feel like a movie is in the visuals. Lin pulls out all the stops, from new ways to make Federation ships look cool in flight, to a ‘snow-globe’ space station that’s like Escher’s take on Elysium, and there’s a time-lapse shot to stir your soul. He’s no slouch with the action either – the early attack on the Enterprise is heart-stopping stuff – and finding a way to work in some ‘classical’ music invigorates a couple of the big set-pieces.

This kind of movie needs a big bad though, and Idris Elba’s Krall doesn’t cut it here. Stifling the Luther actor’s natural presence under prosthetics gives him a villain-of-the-week quality, and his motivations don’t convince. After the opening Enterprise crash there’s nothing close to genuine peril, with every obstacle overcome with the minimum of fuss.

On the strength of this encounter, Trek isn’t going to start challenging Wars as the dominant Star franchise, but there’s plenty of evidence it could still prosper. Beyond is a fun, self-contained romp that serves as a sensitive send-off for both Yelchin and Leonard Nimoy, but it never feels like it truly hits warp-speed.

Justin Lin proves a safe pair of hands at the helm of the Enterprise. Powered by a spirited sense of adventure and a nice teamwork dynamic, it’s fun, but not essential, summer viewing.