There is a good game somewhere inside Star Fox Zero, but its forced reliance on the Gamepad's screen and motion controls cause it to barrel roll right into mediocrity.

Unbelievable. How else could I sum up my disappointment in the supposed grand return of a franchise that hasn't seen a decent entry in nearly twenty years and explain how it's a perfect representation of the Wii U's core failing as a console? Every fear that the Wii U's Gamepad is a gimmicky albatross around Nintendo's neck comes to fruition here, as Star Fox Zero's attempts at legitimizing that idiosyncratic bit of tech become its undoing.

The most exasperating part is that, on paper, Star Fox Zero should at least be a pretty decent time while it lasts. Developed in conjunction with Platinum Games (the team behind the spectacular Bayonetta 2), Star Fox Zero occupies a strange place in series canon. It's neither prequel nor sequel, but rather a reinterpretation of the events of Star Fox 64 (which itself was a reboot of the original Star Fox on SNES). As Fox McCloud, the head of do-gooder mercenary group Star Fox, you'll move from planet to planet, defending the galaxy's citizens from Andross and his evil armada. This usually involves piloting one of several different vehicles depending on the situation, spending time in a series of on-rails sequences (which funnel you forward to a destination), or in larger, open combat arenas. It's your job to fly or drive around and shoot down everything in sight.

In Star Fox Zero, you do that by physically moving the Gamepad around to aim your Arwing's reticle, while using the analog stick to move your craft. It's as awkward and ungainly as it sounds, like rubbing your stomach while patting your head - only you have to simultaneously avoid incoming laser fire. Many of Zero's stages (its larger, screen-filling bosses in particular) require that you shift your focus back and forth between Gamepad and TV screen while you're thrusting your Gamepad around to aim your shots. Maneuvering land vehicles in particular feels like unbridled chaotic flailing (and not in a good way), and for a series that typically values precision under fire, this is a problem. To top it off, you'll find yourself mashing the Y button to recalibrate your aim every few seconds.  After a few hours of play, I felt like I was finally getting the hang of things, but there was never a moment where I felt like Star Fox was better served because of these controls.

This is a damn shame, because when it works, Zero can feel as thrilling as the best moments from Star Fox 64. Part of this is, admittedly, because Zero copies many of the same story beats and action sequences of its predecessors. If you've played any of the original games, you'll probably recognize a lot, like the opening assault on Corneria, your scuffles with rival mercenary group Star Wolf, or the fact that Falco continues to be a giant tool. It can seem like a rehash at times, but the way Zero pulls in elements from different parts of the series makes it feel like a greatest hits compilation, even bringing in deep cuts like the chicken-like Walker originally intended for the cancelled Star Fox 2. Platinum's own penchant for big explosions and theatrical set-pieces elevates these new approaches to old levels more often than not, where a dogfight quickly morphs into an assault on a galactic cruiser, causing you to fly through a gap in its shield, transform into your walker, take it down from the inside, then zip away before it blows up. 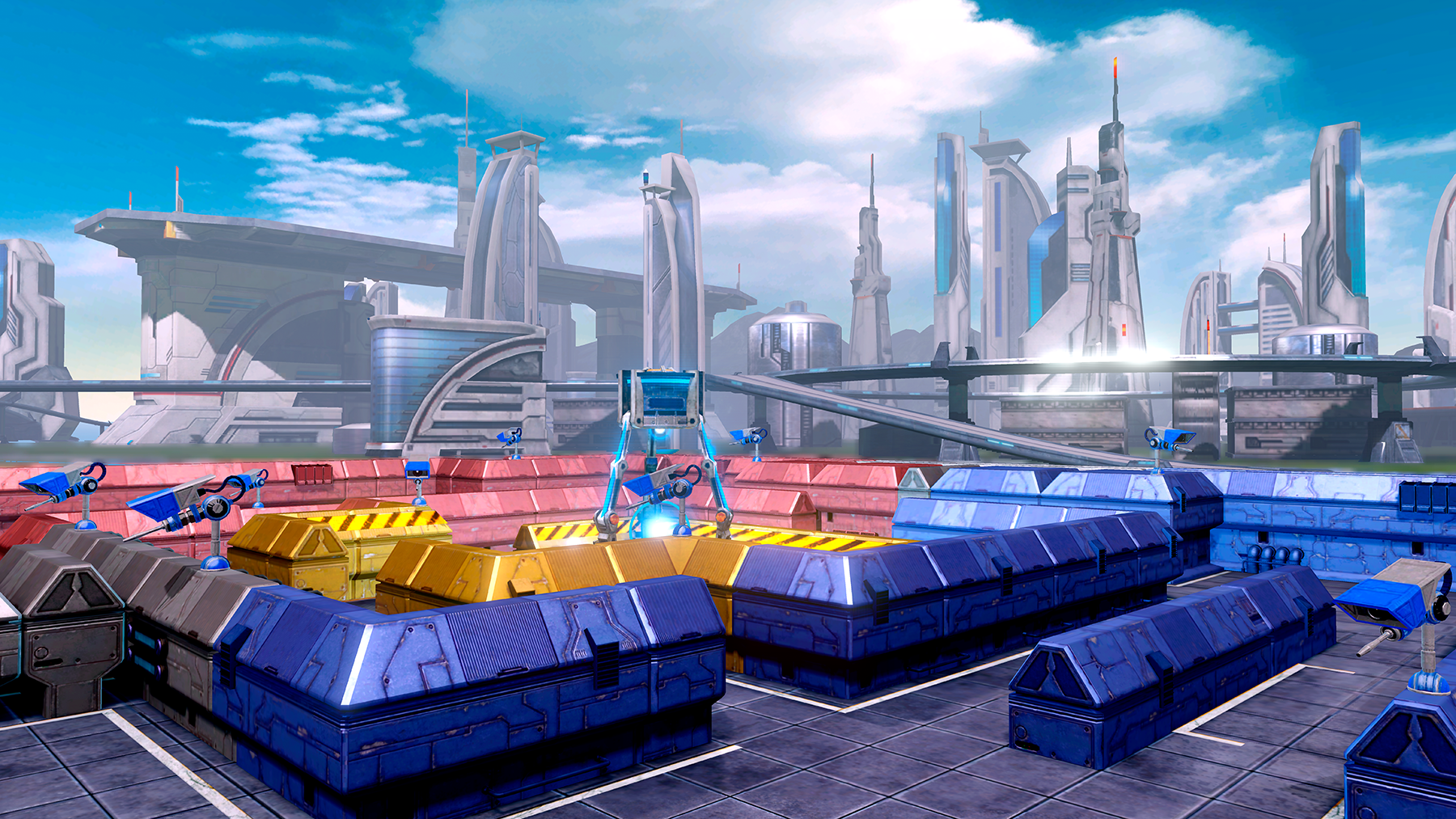 The retail edition of Star Fox Zero includes a copy of Star Fox Guard (also sold separately on the Nintendo eShop), a tower defense game that teams up Slippy Toad with his uncle Grippy as they protect their power core from endless waves of evil robots. It's… actually pretty fun! The TV screen is filled with a dozen cameras, and you use the Gamepad to switch between them so you can gun the robots down before you get overwhelmed. It's not terribly deep, but considering you don't have to move the Gamepad around to aim, you'll probably have a better time with it.

The wholly original creations within Star Fox Zero don't fare so well, though, and piloting the brand-new Gryowing in particular is a plodding chore. It slowly hovers from point to point, its blasters are piddly peashooters so you're better off avoiding combat altogether, and you use it to open locked passageways by hacking computers with an attached robot. The constant start and stop required to solve these inconsequential puzzles turn a potential palate cleanser into a pacing killer, especially when compared to the other, far more exciting vehicles you have at your disposal. Luckily, you only fly the Gyrowing in a couple of levels, and most of the time Zero knows to focus on what it does best: moving fast and blowing stuff up.

Another thing Zero copies from prior Star Fox games: you can finish it in about two or three hours. Like its predecessors, the replayability here comes from exploring levels you've beaten already, looking to increase your high score while searching for secret medals and hidden paths. It's also pretty light on additional modes. Other than the campaign, there are handful of training missions and an additional mode to unlock. Without a proper competitive multiplayer mode to fall back on - there's local co-op, but it's just the same campaign levels with one player flying the ship and the other aims and shoots - the whole package feels very slight.

But slight is fine if it's at least fun to play, and even a perfectly designed campaign packed to the rafters with content couldn't cover up the awkwardness of Star Fox Zero's controls. That's what's so disappointing - there are moments of greatness in here, little sparks that, despite other flaws, remind me why I loved Star Fox 64 in the first place. Unfortunately, all of it is constantly undermined by a slavish devotion to wrapping the core design around every feature of the Wii U's Gamepad, regardless of whether it makes sense or feels good to play. 19 years is a long time to wait for a game to live up to the legacy of Star Fox 64, but we're going to have to keep waiting. This game isn't it.

There is a good game somewhere inside Star Fox Zero, but its forced reliance on the Gamepad's screen and motion controls cause it to barrel roll right into mediocrity.

Less
David Roberts
David Roberts lives in Everett, WA with his wife and two kids. He once had to sell his full copy of EarthBound (complete with box and guide) to some dude in Austria for rent money. And no, he doesn't have an amiibo 'problem', thank you very much.
See comments
Gaming deals, prizes and latest news