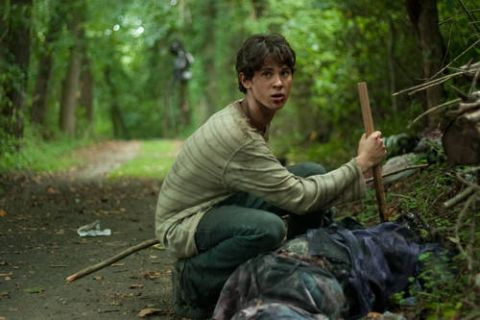 If its genre movies are to be believed, America is in deep trouble.

Everywhere you look, from bigbudget blockbusters (The Book Of Eli) to offbeat indies (Diary Of The Dead) and horror comedies (Zombieland), The Land Of The Free is depicted as a blasted wasteland of broken people.

It’s not a hard and fast rule but, when filmmakers start re-imagining their country as somewhere Mad Max might consider inhospitable, it’s maybe time to start worrying for the national psyche...

Though this post-apocalyptic vampire road-movie channels most of the above, none of them managed to conjure such bleakness on a budget so meagre.

Part gothic action-fantasy, part elegy for a world gone to hell, Stake Land doesn’t pull its punches in critiquing the religious right, as the Christian fundamentalists, led by Michael Cerveris, prove more dangerous than the undead.

It also displays a sharp eye for detail: Mister and Martin set traps before they sleep, throw crucifixes like boomerangs and use metal fencing to armour their cars.

Having created such an impressive, immersive world, however, the filmmakers don’t quite know how best to explore it.

The narrative meanders, characters drift in and out (Top Gun’s Kelly McGillis gets particularly short shrift), and budgetary constraints strip action scenes of some of their power. Pity, because as an example of ambition over originality Stake Land is highly promising.

The Motherland may be doomed, but the future of defeatist filmmaking looks very bright indeed.