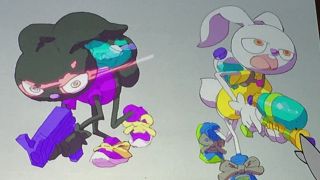 You're a bunny now, your paint's all runny now, you're… Nope, definitely doesn't work anywhere near as well as "You're a kid now, you're a squid now." But there was a time when Splatoon could have starred cute lil' rabbits instead of the fashionable human/squid hybrids called Inklings. During his GDC 2018 talk "Splatoon and Splatoon 2: How to Invent a Stylish Franchise with Global Appeal," producer Hisashi Nogami gave a look at the shooter in its earliest stages, including its original, fur-covered protagonists - specifically, rabbits who love splashing paint everywhere.

Like most games, Splatoon started out as a rudimentary prototype made as a proof-of-concept. In what Nogami nicknamed the "Tofu Prototype," players were represented by large grey slabs - but many of the core concepts were there, like splattering the map with your team's paint, blasting other players to temporarily knock them out of the fight, and taking cover by dipping underground. Its understandably drab, especially compared to the finished game; like an old-timey comedy bit, the only colors you could throw around were either dark grey or white paint.

Those dark and light colors lent themselves to the concept of playing as rabbits. Their fur naturally comes in varying shades, and real-life rabbits are quite territorial, which fit perfectly with Splatoon's turf battles. Nogami also noted how the rabbit's basic appearance would contrast nicely with all the brightly colored paint flying every which way. But when Nogami showed the concept to other teams at Nintendo, he was met with understandable questions: why would the rabbits be shooting paint? How could they sink into the paint on the ground? There was a disconnect between gameplay and appearance that had to be addressed.

Thus, the team went back to the drawing board and landed on another creature in nature: squids, leading to the Inklings we now know and dearly love. And hey, things could've been even weirder than rabbits - one prototype starred a bunch of gun-toting, color-coded Yoshis.