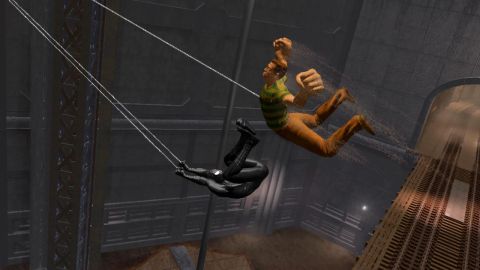 You know a game is bad when people stop what they're doing just to watch it suck. That's what reviewing Spider-Man 3 was like. Every few minutes something appalling would happen, something so annoying that passersby had to plant their feet and witness the horror. We're not saying Spider-Man 3 is the worst game of the year, or the worst on any individual system, but it's easily one of the most disappointing, rehashed experiences in a long while.

First of all, Spidey's playground has not been drastically improved. It's the same New York you slung webs through in 2004's Spider-Man 2, complete with Roosevelt Island and a near-perfectly recreated Manhattan. Seeing as everyone's familiar with NY already, there's no great incentive to swing around and explore. Some additions, like the extra bridges, just lead to a vast nothingness. Granted, there's only so much you can do with a real-life city, but part of having one giant level in the game is making it interesting for the player. We've done this twice now, and improved graphics aren't enough of a reason to slap money down all over again.

On the plus side, the 360 version is hands-down better than the PS3 game. That version is wrought with sticky, choppy gameplay that sucks the web-slinging excitement right out of the air. At least here you can still enjoy flipping and flying all over the place. It's also worth noting that some areas of the 360 version actually look better than the PS3 version, yet with no overbearing slowdown.