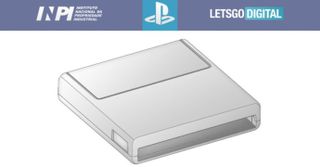 Sony Interactive Japan has since updated its curious patent for a new cartridge prototype (as spotted by LetsGoDigital), clarifying that the product is "a recording medium which can record various data, such as a character, an image, an animation, a sound and a program."

"By loading the opening provided by the game console with the tip end part by which a variety of pins of this cartridge were provided," continues the Japanese Patent Office's added description, "the various data recorded on this cartridge can be read”

This mention of a pin system rules out the cartridge's potential as a new form of internal memory storage for the PS5, since a hard drive needs a traditional SATA connection to operate within that kind of hardware. That said, this update instead seems to support the idea of this product being a type of attachable accessory to the next-gen console, perhaps in the form of an external SSD that can be connected and disconnected manually for convenience.

See original story below for more:

Sony has registered a patent for a new, potentially PlayStation, cartridge, according to LetsGoDigital. The site reports that it was filed at the same Brazilian patent office as the June 2019 patent for the PS5 Dev Kit, but it's unlikely this cartridge will be for the PS5.

The inventor of this curious new product is Yujin Morisawa, a 15-year Sony veteran who has designed cosmetics, the Agent robot, and oh, the PS5 dev kit during his tenure. The news for this cartridge is emerging in the same fashion as the rumors about the next-gen console's specs (same patent office, same designer, same publication reporting on it) , but it's still not feasible to believe Sony would put a cartridge reader in the PS5. They've never used a cartridge for any of their home consoles, for starters.

The PS5 probably won't play cartridges, but we do have an idea of what it will do: we know it'll have a disc drive that can read triple-layered discs for 8K visuals, it will support 3D audio, lightning fast SSDs, and backwards compatibility. It'll even allow you to install games in chunks so that you don't have to install the multiplayer and the campaign in one fell swoop.

However, that still leaves us guessing what this cartridge patent could be for - the patent only includes one photo of a pretty standard-looking game cartridge, so we won't get any hints from that. The PS Vita played cartridges, but Sony has repeatedly  expressed  disinterest in building a new handheld console, so that seems equally unlikely. Back in 2017, Sony submitted a console patent for what ultimately became the Sony Toio, a kid's toy that was produced in Japan, but when the patent was released a year later, speculation ran wild.

So, this mystery cartridge is likely for a new kid's toy, not for the PS5. Sorry to disappoint.

It's the last year to really capitalize on the Black Friday PS4 deals, and we've got you covered.