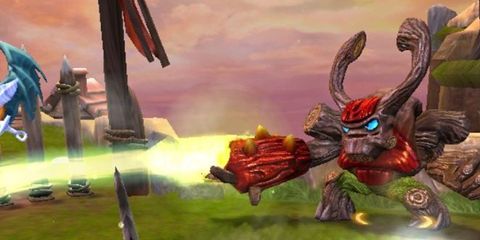 The Skylanders have returned to Skylands, which is once again threatened by the evil Kaos and his minions. But this time, they're joined by their much larger brethren: the Giants. We enjoyed the sequel (which you can read about in our Skylanders: Giants review), but now the title has made its way to Nintendo's new console complete with a few extra Wii U features.

Giants takes place after the events of the first game. Kaos has escaped his exile to Earth and has returned to Skylands to capture the power of the Arkeyans (huge mechanical monstrosities which the Giants beat up a long time ago). To defeat the Arkeyans, the Portal Masters (you and your pals) need to enlist the power of the ancient and gargantuan Giants.

The gameplay is almost identical to the original title. You'll explore multiple environments in the lengthy campaign, finding collectible hats, hunting down Skylander Soul Gems, and leveling up your characters. The simple beat-em-up gameplay is still intact, challenging players to overcome enemies using basic attack combinations--but the action stays entertaining throughout, thanks to the character progression system.

The new Giants characters can throw huge rocks and smash through barriers that allow them access to areas the standard Skylanders can't get to. Each of the giant characters level up, earn additional abilities, and belong to one of the Skylander element types (water, fire, magic, tech, air, undead, earth, and life). The Giants are just as addictive to collect and play as their smaller counterparts, but they'll cost an additional five dollars over the originals.

The Giants figures themselves are impressive collectors items. Each one is about double the size of a standard figure and are neatly detailed. The most impressive feature of the figures is their light cores. When a Giant figure is placed on the Portal of Power peripheral, the eyes and other parts of the figure will glow, making the Portal's flashy light display even more entertaining when you're switching out your characters.

The Wii U version looks and plays essentially the same as the Xbox 360 and PlayStation 3 versions, but with a few additional features made possible by the GamePad's touch screen. Every menu in the game has been outfitted with touch-screen features, which streamlines navigation. The on-screen touch icons are easy to identify, and large enough so you won't have to fumble with the controls much. However, you can't swipe through lists, which, if the feature was implemented, would have made cycling through the menus like the hats screen much more efficient.

Outside of the menus, players will be able to view their Skylander's statistics on the GamePad screen, which is a nice bonus. But other than a few menu options, there isn't much of a difference for the Wii U's edition. The combination of the Portal of Power's light show and the glowing cores of the Giants alone are almost enough to want to collect every one of the new characters. While the gameplay hasn't received many updates, the entire package is definitely enough to keep your collection growing.