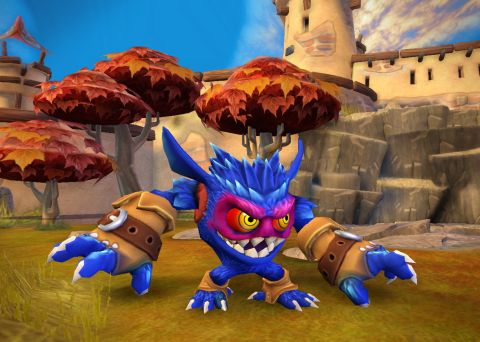 The Skylanders return in Skylanders: Giants, adding more enemies to defeat, new worlds to explore, hats to collect, and, of course, more figurines to purchase. Lord Kaos has escaped his exile to the Portal Masters’ world (Earth), and is once again wreaking havoc on Skylands with the help of the giant mechanical monstrosities called Arkeyans. But these foes prove too tough for the typical Skylander, so Master Eon has enlisted the help of the Giants (Skylanders that are, you know, big).

Check out this trailer for Skylanders Giants

Giants (like the original Skylanders) is played using collectible action-figures and a figurine reader called the Portal of Power. Placing a figure on the portal launches that character in-game while storing the abilities, gold, and experience points earned by that character during gameplay. Your stats and equipped items carry over from the previous game and the level cap has been increased from 10 to 15, so you won’t have to worry about starting from scratch if you already have a high level character. The new Giants figures are about double the size of a standard Skylander figure and feature special light-up parts, like glowing eyes and illuminating weapons when on the portal.

The portal system works extremely well, and it adds to the overall experience. The portal lights change color according to the Skylander’s element type, and the giants themselves look amazing when they’re all lit up. You can change your Skylander in the game at any time just by switching the figure on the portal. This pauses the game and plays a charming, short cinematic of the incoming Skylander, then kicks you straight back into the action.

You’ll explore a variety of locations made up of themed levels that have various enemies to fight, secrets to find, and simple puzzles to solve. The first Skylanders title was geared toward the younger crowd, and Giants is no different. The majority of the puzzles involve pushing blocks in the proper sequence or finding a switch or key to open a door--nothing too challenging. The beat 'em up combat is fairly simple as well, requiring players to mash attack buttons and strategically use secondary powers to overcome enemies.

The Giants don’t particularly add much to the gameplay, though. They enable you to open paths blocked by boulders, break through otherwise indestructible barriers, and interact with heavy objects--but other than that, the Giants are just like the other Skylanders, except they take up more screen space.

Giants stays entertaining thanks to collectibles and character progression. Each level has alternate pathways and hidden treasures to discover behind elemental barriers that only specific Skylander types can open, giving you access to bonus hats and collectable character Soul Gems. Gathering all of the collectibles in each level quickly becomes an obsession, and amassing a set of figures with one of each Skylander type (fire, water, life, magic, tech, air, undead, and earth) can take a toll on your wallet. Hidden costs aside, hats equipping your Skylander grants them stat boosts, and Soul Gems unlock ultimate attacks for specific characters after you reach the Skylander’s higher experience levels.

When your character levels up, you can upgrade its abilities. Eventually you’ll have to choose between one of two skill trees that enhance one specific attack type. For example, Spyro can choose between having more powerful fireballs or a stronger charging horn attack. Finding Soul Gems allows you to buy the respective Skylander’s ultimate ability and be treated to a short cinematic showing off the character’s moves (inspiring you to buy the ones you’re missing). Improving your Skylander is as addictive as leveling a character in an RPG, and if you get tired of playing one character, you can just switch out the figure and start on another. The Skylanders level-up quickly, so it never feels like a grind.

Skylanders Giants is essentially more of the same. Developer Toys for Bob has added more characters, collectibles, and mini games to the already solid offering of the original title, but if you were expecting the giants themselves to make a significant impact on the gameplay, you might be a little disappointed. Still, the lengthy campaign is fun while it lasts, and gathering Soul Gems, leveling up your figures, and grabbing hats is as addictive as ever.

This game was reviewed on the Nintendo Wii