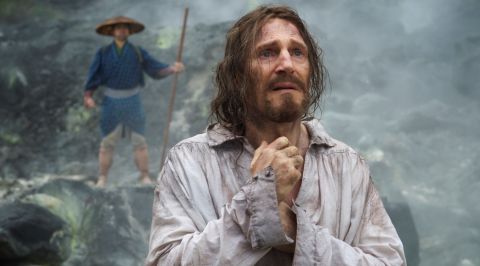 If you want GoodFellas 2, be warned this is more Kundun, as Scorsese blends his twin religions of Catholicism and cinema to considerable effect.

In his riveting documentary A Personal Journey With Martin Scorsese Through American Movies (1995), Scorsese talks of alternating commercial movies with personal ventures – a ‘one for them, one for me’ policy.

Silence, more than even the long-gestating Gangs of New York, is Marty’s ultimate ‘me time’, a religious thriller that he’s wrestled towards the screen for 27 years since discovering Shūsaku Endō’s same-titled book. The film finally reaches audiences as his first since The Wolf of Wall Street, which, at $392m, is his biggest box-office hit. One for them, one for him.

Silence follows the 1640 mission of two Portuguese Jesuit priests, Father Rodrigues (Andrew Garfield) and Father Garrpe (Adam Driver), as they sneak into Japan to propagate the outlawed faith of Christianity and to search for their missing mentor, Father Ferreira (Liam Neeson). News, perhaps slanderous, has reached Portugal that Ferreira was tortured until he apostatized by stepping on an image of Christ. Refusing to believe such a thing, Rodrigues and Garrpe arrive to discover a land of crumbled churches and blood-soaked soil.

Stripping back his signature style to deliver a stately epic comprising largely static shots accompanied by next to no score, Scorsese nonetheless enthrals, his priests scuttling over verdant mountains, along roiling coastlines and down mist-wreathed rivers.

The near-constant murmur of wind and chirrup of insects are interrupted by hushed, urgent dialogues and a voiceover snatched from Rodrigues’ thoughts, prayers and letters home to Father Alonso (Ciarán Hinds), a busy soundscape that makes God’s silence all the more deafening.

And while the leads’ slip-sliding accents can snap the viewer out of this suspense-shivered fever dream – it’s hard not to long for Gael Garcia Bernal, Benicio del Toro and Daniel Day-Lewis, the cast of the 2009 iteration that fell apart – the craft is faultless.

Like The Last Temptation of Christ, Silence clashes the spiritual and the practical, the human and the divine. And like Mean Streets, Taxi Driver and Bringing Out the Dead, it searches for God among squalor and violence, with Inquisitor Inoue (Issei Ogata, superb) overseeing abominable tortures of body and soul to quash Catholicism.

Set at a time when 300,000 Catholics were forced to relinquish their faith or else practise it in secret, it is now Rodrigues’ turn to have his resolve put to the sternest of tests; he is not without pride, and his vision of himself as a Christ-like figure destined for martyrdom is about to be rigorously dismantled.

Just how multiplexers will respond to 160 minutes of frequently austere soul-searching remains to be seen, but it is gladdening that Scorsese’s own time of questioning and loneliness is over. Silence is his communion, and amen to that.

If you want GoodFellas 2, be warned this is more Kundun, as Scorsese blends his twin religions of Catholicism and cinema to considerable effect.