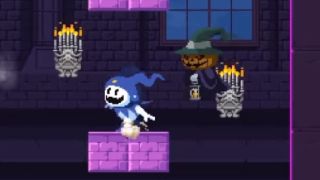 Shin Mega... y'know what, I'm just gonna call it Synchronicity Prologue from here out... stars the Atlus mascots Jack Frost and Pyro Jack as they travel through a 2D world inspired by Strange Journey. Together, they'll fight demons and explore the world by combining their powers of ice and fire. Kinda like Sonic Boom: Fire and Ice, except, y'know, about demons and not furry anthropomorphic animals.

Fans are onboard with the concept, as one Twitter user wrote, "I would pay full price for a full-length follow-up to this game on Switch," with others jumping in to agree. I admit I'm not the biggest SMT series fan, but I like the concept of exploring its unique universe in a different way. And who knows, maybe if enough people download Synchronicity Prologue the idea could be expanded into a full-fledged offshoot of the main series.

The trailer which announced the game called it a fake, but you can definitely download it right now from the Atlus website. A few caveats: the game is only available for Windows, text is written in Japanese, and it's only available until December 24. That said, if you're a fan of Atlus' demon-summoning, demon-fighting, demon-infested series all about demons, you could find quite a bit of fun here that won't cost you a dime.