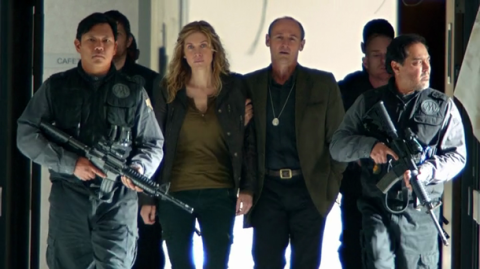 THE ONE WHERE The Matheson's deal with their loss, while Randall Flynn strikes a deal with the Monroe Militia.

VERDICT After the death of Danny last week the Matheson gang is feeling the loss. Miles is drunk, and Rachel and Charlie have unresolved mother/daughter issues, but the gang hardly has time to catch its breath and bury Danny. Randall Flynn is coming and by the end of this week's particularly good instalment he's out of the shadows and staking claim to the title of Revolution 's new big bad, a man with complex morals.

Flynn arrives at the doorstep of Sebastian Monroe's Philadelphia stronghold like double glazing salesman in league with the devil and makes Bass an offer he can't refuse. To paraphrase: “If you get your head out of your ass I can give you everything”. Bass giggles, not used to hearing that kind of fruity language directed at himself by a complete stranger. Flynn's steely government gaze meets Bass's mad ol' stare. Bass wants power, Flynn needs resources. They can clearly help each other, and it makes for a dangerous and interesting dynamic as the show pushes in a new direction.

Aaron notices the two pendants they have collected have switched themselves on. “They do that,” says Aaron to Rachel, who freaks out revealing that the pendants don't just have the ability to control the power, but can provide a GPS signal and be tracked. Flynn is indeed coming, and now he knows where they live. Rachel pulls the pendants apart to destroy them, revealing the familiar oblong USB socket poking out, and – hurrah! – Aaron asks the question I've been wanting the answer to ever since us viewers found out the pendants were also flash drives (or USB memory sticks if you shop at PC world). If they are drives then what's on them? Eh? Secret plans? Holiday snaps? Rachel’s CV? Old episodes of MacGyver ? It was revealed previously there were 12 pendants and with Rachel destroying two here, the idea floating around on the internet that each pendant contained part of a larger plan now seem scuppered.

Miles wants revenge for Danny and goes looking for an old friend who like himself deserted the militia and is leading a new life as a librarian. Meanwhile Charlie is taking Danny’s death hard, taking it out on any militia kill squads that get in her way. There's never been much evidence of any maternal instinct between Rachel and daughter Charlie, mainly as Rachel gave herself up to Bass to save her family, spending most of the first half of the season in his fortress in Philly. With the loss of Danny on both their shoulders, and neither seemingly given to the process of grieving, Charlie is quick to point out mum's diminished responsibility.

Revolution has a solid ensemble cast which has expanded as the show has moved on, and this is a meaty episode with plenty of plot. That said, there are no real stand out performances or scenery chewing guest stars that either graced or plagued the first half of the series depending on you point of view. I like a good bit of OTT acting, but it's not everyone cuppa. There's a bit of stiffness in the sympathy between Rachel and Charlie. Tracy Spiridakos and Elizabeth Mitchell are both good in their own right, but even allowing for a mother that's not been in her daughters life much, I feel there's a slight “maternal synergy” missing in the interaction between their characters. If I had a favourite It would still be internet ex-millionaire, Aaron. He asks all the right questions, is constantly shell-shocked at the goings-on around him, and could still be an incredibly useful wildcard in sorting out the power problems, but seems to spend a lot of time being kept in the background on exposition duties.

This is Randall Flynn's episode. He not only gets a flashback but also a bit of slo-mo corridor walking, just to hammer home how much of a bad man he is, and complicated. When first introduced in flashback in the first half of the season, he was a smiling benefactor. A balding man from the department of defence willing to fund Ben and Rachel Matheson's wacky electricity nullifying field generator project that could turn off phones and clocks. Now we see him for more of a bureaucratic dick, a puffed-up middle manager who's paid top dollar and demands results from his overworked scientists, but there's even more to it than that. Flynn has a lost a son to the war in Afghanistan and when his flashback places us at ground zero on the night of the blackout Flynn is sitting at the head of a table of military tough nuts, holding his sons dog tags. His motivations suddenly don't seem so clear. Was the blackout a test firing that went horribly wrong, or did Randall deliberately sabotage it out of revenge for his sons death? Did Randall Flynn cause the Blackout? Damn you Revolution and your quick-cutting, question-baiting narrative.

Plenty of swashbuckling action this week, and nice to see a bit of new scenery too as the action moves away from Philly to abandoned office complexes and new towns. More mentions of “The Tower” and new character, Jim Hudson who I suspect we'll see more of. The second half of Revolution 's first season is off to a very strong start.

UNFORTUNATE VICTIM OF THE WEEK Crossbow victim No. 2. Charlie could teach the Oliver Queen a thing or two; she’s getting very handy with her crossbow. She may look like she's having a spot of bother reloading it, but that can't be down to lack of muscle as the naughty militia chap bearing down on her is dispatched instantly with an arrow in her hand. Arrow punch!

BEST LINE(S):
Flynn: “I couldn't make my mind up if you were worthy, or if you had your head deeply up your own ass.”
Bass: “Most people don't talk to me like that.”
Flynn: “Most people don't have the power to hand you a continent. I could have have gone to Georgia or California, but I chose you. So stick with me, I'll bring you more pendants and scientists, sir. I can give you everything. So lighten up.”

Read our other Revolution reviews

• Have you started making use of the SFX TV Reviews Index yet?