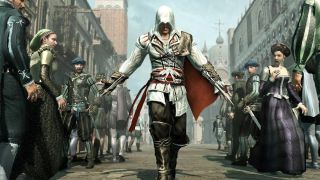 When Sony finally announced that the PS5 would be backwards compatible with the PS4’s entire library of games, the collective cheers that subsequently rippled across the internet were deafening. For all its success with the current iteration of its PlayStation console, Sony's greatest mistake with the PS4 was underestimating the power of nostalgia, leaving a gap in the market for legacy software which Microsoft quickly capitalised on with its own extensive backwards compatibility programme for the Xbox One in 2015.

But that vacuum also allowed a new genre to emerge, one which could satisfy player's desires to revisit their favourite titles of the past when simply inserting old discs into new consoles was no longer a viable option. Beginning as early as Tomb Raider: Definitive Edition and The Last of Us Remastered in 2014, developers began to explore what it meant to adapt last-gen titles for current hardware. At first, that simply involved a rudimentary port with visual tweaks like upscaled resolutions, improved textures, and *whisper it* hair physics, but the art and science of the remaster has evolved into so much more since.

Now, players who pick up a newly remastered title can expect to find an all-encompassing, super special, Director's Cut edition of a game, one that plays like an entirely new experience in and of itself. Bulletstorm: Full Clip Edition featured an alternative mode where you could play the entire campaign as Duke Nukem, Gears of War: Ultimate Edition reanimated every cutscene and modernised its multiplayer to bring it in line with Gears of War 3, while GTA 5 added a completely new, first-person perspective to its open world action escapades.

Eventually, as the increasingly strong sales of these products began to reflect a keen consumer appetite for gaming history, developers weren't so much remastering titles as they were completely remaking them. The likes of Ratchet & Clank, Yakuza Kiwami, and the Spyro Reignited Trilogy saw fan favourite classics reborn for the eighth gen era, where even distinct story beats and iconic gameplay features were beginning to be tweaked and reformatted for a modern audience. In this sense, the remaster has unquestionably become one of the biggest success stories of the last half decade, burgeoning from near non-existence into a hugely popular way for developers to generate new profit for old titles. But that might be about to change.

9 remasters that improve on the original in every way

If the reports are to be believed, the PS5 isn't just backwards compatible, it's capable of automatically remastering PS4 games "by emulation". During his revelatory interview with Wired, PlayStation Lead Architect Mark Cerny reportedly played Spider-Man PS4 on a dev kit of the upcoming next-gen console, reducing the game's load times to a few nanoseconds and allowing its framerate, resolution, and processing speed to soar to unprecedented levels. While the full details of the system's internal technology are yet to be completely unveiled, it's looking very likely that the PS5 will "auto-enhance" backwards-compatible games in the same way that the PS4 Pro is able to improve the fidelity of standard PS4 titles.

In theory, this could render the entire purpose and value of a traditional remaster as null and void. Why would I pay full price for an enhanced edition of a legacy title, when my original PS4 copy of the game will look and play just as well on the PS5? With Microsoft's continuing pivot to an all digital gaming ecosystem, and backwards compatibility looking a sure thing for its own next-gen hardware, it's likely that the PS5 won't be the only next-gen console automatically remastering old games either, leaving the future of the traditional remaster uncertain to say the least.

However, Darwin tells us that those who adapt, survive, and developers could still carve out a future for the remaster once the PS5 and Xbox Project Scarlett finally arrive, should they learn how to respond to the implications of this ambitious backwards compatibility tech. While the standard remaster, one of upgraded graphics and little else, is unlikely to find much demand in a world where a player's own consoles can do all of that work for them, the more ambitious remakes that have performed so well in recent years could certainly carve out a comfortable spot in the next-gen era.

These types of titles would inevitably require far more work on the developer's part, but the sales results of Crash Bandicoot N.Sane Trilogy and Resident Evil 2 Remake speak for themselves, suggesting the fruits would be well worth the labour. Some studios, like Bluepoint Games, are even beginning to make a healthy living for themselves on remakes alone, with no shortage of franchises and cult classics that fans would love to see reimagined for a new era.

That said, I can't see a place for the standard remaster (at least as we currently know it) in the world of future consoles. That might seem like sad news for old-school enthusiasts, or anyone expecting to see their forgotten gems given a second chance with a next-gen repackage, but this changing tide is ultimately a victory for the consumer. Sony's turn away from backwards compatibility with the PS4 could have been a permanent pivot but the success of the remaster has pushed them back towards a more consumer friendly model for its successor. Ironically, that shift may have come at the cost of the remaster itself, but – if that does turn out to be the case – we can at least appreciate the legacy this curious genre has imparted upon gaming's future.

Remakes... remasters... how about the best video game reboots to have been made so far? Find out the ones you've missed, or watch the video below for a guide to best new games of 2019 still on the way.