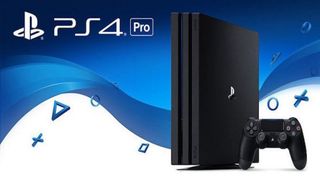 Be in no doubt: I’m an obsessive buffoon who pays way too much attention to pixel density. Want to know how far down the rabbit hole of 4K fanaticism I’m prepared to go? I can remember exactly what I was doing when PS4 Pro was announced. Like, ‘to the minute’ exactly. Safe to say, I’m a big fan of Sony’s beefed-up PlayStation.

Skip back to 7 September last year, and you’d find little Meiks sipping the world’s weakest Bloody Mary in a Parisian bar (near Notre-Dame, to be exact); finger desperately jabbing at a phone trying to resuscitate a faltering YouTube stream of the Pro’s PlayStation Meeting. That’s right, I was so excited about a new PS4 finally squeezing extra pixels out of my Ultra HD telly, I chose to look at a 240p stream of a video game conference rather than savour the glorious sights of autumnal Paris. Now that’s how you holiday.

The phrase you’re after is ‘silly git’. Why am I so obsessed with PS4 Pro? Because it’s a brilliant-value piece of kit. Having owned the console since launch, and spent months enjoying games at far higher resolutions than the standard PS4 is capable of, I’m absolutely certain it’s the best £350 I’ve ever spent.

As someone who’s blown an obscene amount on PC parts, I know just how prohibitively expensive chasing the 4K gaming dream is. Take a sec and Google ‘GTX 1080 price’. That’s the crazy-expensive graphics card I own... um, actually, I have two of ’em. Now, my rig can easily handle games at Ultra HD – usually at 60fps to boot – but with the amount of money I’ve spent building that PC, I could have bought enough PS4 Pro consoles to construct a fort.

Sony’s entry price for 4K gaming is a damn steal next to the PC equivalent. To build a rig that can comfortably handle the likes of Rise Of The Tomb Raider at 2160p, you’re looking at a machine that would likely need 16GB of RAM, a £400 graphics card and a £300 CPU. Throw in a decent motherboard and 4K monitor, and that’s basically a £1500 outlay.

£350 is starting to look pretty tasty now, right? Admittedly, I’m part of a very specific, hardcore niche that PS4 Pro is targeted at. I own a 4K TV, I care about high resolutions, and I want the best console experience possible. Would I recommend PS4 if I ‘merely’ had a 1080p set and wasn’t that fussed about playing 4K games? Probably not.

Even if you’re happy with the base PS4 – and you absolutely should be, it’s still great – Sony’s latest system offers serious value for money. A few months in, I’m head-over-heels for the Pro’s 4K revolution.