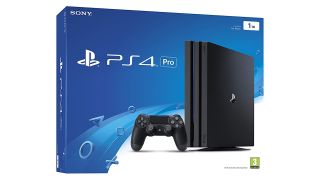 Should you buy the PS4 Slim or the PS4 Pro during the Cyber Monday 2019 sales? Do you want to go for the small, cheap, proven PS4 that will happily play every PS4 game ever released, and a load more too through backwards compatibility? Or do you go for the upgrade, the all-singing, all-dancing PS4 Pro that does everything the PS4 does and adds in the potential for 4K gaming and 4K streaming services? Both will be heavily discounted in the PS4 Cyber Monday deals that will appear in November.

It’s quite a conundrum. Let’s look at the data: last year, a 1TB PS4 with a game (Marvel’s Spider-Man, which is considered quite good) dropped to $199 on Amazon. Add Horizon Zero Dawn: Complete Edition (also riding high in the review scores) and you would have paid $250, which at the time was a fine bargain. That same console without the games is currently retailing for $289 on the same site (last year it was $299 in October), so we could see similar prices, or perhaps even $10 lower, this year. It’s perhaps better to buy a second game separately this year, however, as Horizon Zero Dawn: Complete Edition is now part of PlayStation Hits, and goes for $20 or less, making the $50 premium for it look poor value in 2019.

Cyber Monday game deals: what to expect, and when to buy

Other PlayStation Hits games you can pick up for a snip with your new console include Uncharted 4 (and the Nathan Drake Collection too), The Last of Us Remastered, Metal Gear Solid 5 Definitive, Yakuza 0, Destiny 2, and Bloodborne. Just three of those, which all reviewed well, would provide a bonanza of gaming if you’re new to the PlayStation 4.

We don’t recommend getting a PS4 with a 500GB hard drive if you see one still being offered. No doubt it will be reasonably priced, and might do if you’re a light user, but the sheer amount of data that games and system updates like to store on the internal drive means you’ll be fishing around for a PS4 external hard drive pretty soon after you start using the console. Having 1TB of storage from the start means you’ll be able to go for longer, and play more games, before you need to make the soul-crushing decision of what to delete to make way for something new. The only real exception here is if you’re just looking to play a couple of games on the console, like FIFA 20 and COD: Modern Warfare, for example – if so, then 500GB will probably be ok for you.

Up until now we’ve concentrated on the PS4 Slim, which is essentially the same PS4 model that launched in 2013, just in a swanky new smaller casing. It took just over three years for the PS4 Pro to appear, an upgraded model with faster and bigger bits inside that allow it to run games at a higher resolution (4K), and slightly more efficiently, than its older brother. It's worth mentioning that a PS4 Pro is probably only worth getting if you have the TV to make the most of it – while it will work perfectly well with a ten-year-old 1080p LCD, you might as well save money and go with the PS4 Slim. Those whose eyes gaze upon 4K HDR models, however, will definitely benefit from the increased resolution and performance on offer. The Pro also comes with a 1TB HDD as standard.  If you plan on upgrading your screen in the future, with one of those handy Cyber Monday TV deals,  it might be worth considering the Pro now so you have something to show off when the new screen arrives.

A PS4 Pro 1TB is $379 right now on Amazon. It wouldn’t be unreasonable to expect that to drop to $299, and perhaps to have a game bundled with it too. We didn’t see significant drops on the Pro last year, but that was because Sony teamed up to offer a Pro+Red Dead 2 bundle, which was popular enough to sell at full price. Rumours persist of a Game of the Year Edition of Marvel’s Spider-Man, which would be worth looking into if you haven’t already played it. FIFA 20 is a persistent bundled game – the number seen on shelves in second hand stores is testament to this – but also look out for God of War, Borderlands 3, Resident Evil 2, and The Witcher 3.

Most PS4 games get some sort of upgrade when slotted into a Pro, but not all are created equal. Look out for GT Sport (another frequent bundle choice), Red Dead Redemption 2, Wipeout Omega Collection, Hellblade, Hitman, and Final Fantasy 15 to see what 4K HDR gaming is all about.

The final thing to consider is PSVR. You could easily pick up a PS4 Slim and a VR headset for the price of a PS4 Pro this Black Friday. If your TV isn’t up to the PS4 Pro’s pixel-pushing prowess, the PSVR is a great way to experience a new facet of gaming, even if you do look a bit of a noodle using it. PSVR is no longer limited to bespoke experiences, with big-name games now coming tailored for the immersive thrills of virtual reality. VR games worth checking out include Doom VFR, Borderlands 2 VR, No Man’s Sky, Tetris Effect, Superhot VR, and Resident Evil 7. You’ll find them heavily featured in Cyber Monday PlayStation VR offers.

If you can’t be bothered to trawl through the Cyber Monday sales, here are some of the best PS4 deals around right now.