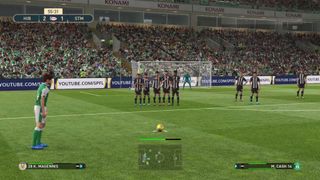 It’s that time of year again. PES 2019 is upon us and, if you’re anything like me, you’re going to be eager to jump right in and play some football. But stop right there. Before you even kick a ball in anger, you’re going to want to check out these PES 2019 tips. The game may not have undergone any radical changes this year, but Konami has tweaked enough for you to be a bit baffled once you’ve fired up the game. Here’s how to get the upper hand with eight essential PES 2019 tips.

For Konami, and both long-term and new PES fans, the news that PES 2019 lost the UEFA Champions League and Europa League license will have been a bitter blow. Sure, it’s a big loss – but there’s still plenty to shout about. Namely, seven new licensed leagues, including one exclusive league that won’t even be in FIFA 19.

Roll call: the Argentinian Primera Division, Belgian Pro League, the Danish Superliga, Portugal’s Liga NOS, the Scottish Premiership, Swiss Super League all feature for the first time. The Russian Premier League, though, which features the likes of CSKA Moscow, Anzhi, and Rubin Kazan, will all be exclusive to PES 2019. That means you’ll be able to exclusively control players such as World Cup standout Alan Dzagoev, and Spartak Moscow’s  insanely speedy Quincy Promes on PES 2019 and only PES 2019. Not quite a FIFA killer, but it’s an interesting addition nonetheless.

2. Time for a change in match length

The game isn’t quite at a snail’s pace this year, but the newly-found emphasis on players’ heavier first touches and teams constantly vying for space means that games can often peter out into turgid affairs more often than not. The default five-minute halves just aren’t good enough anymore, and often produce far lower-than-average goals.

To counteract this, you should absolutely increase your half length this year. Around six or seven minutes (though I favour the former) appears to be the optimum length, though tinker how you see fit. Games will start to mimic real-life affairs more closely, with teams tending to tire more in the last third of and game. All in all, it makes for a more realistic experience – and who wouldn’t want that?

Master League is pretty much the same beast as it ever was – with one key change. When booting up the mode for the first time (or simply starting a new career) you’re now given the option to choose between Classic and Challenge under the Club Operations tab.

Classic is, as you expect, just as it ever was, a pretty streamlined career mode with the emphasis on creating the best team possible and blowing away everyone in your path. Put Challenge on, however, and you experience more difficult contract negotiations, a few more egos in the dressing room and the looming threat of the sack. It’s more fun that way. Promise.

Want to change things on the fly? Advanced instructions, accessible from the tactics Game Plan menu is your new best friend. To find it, head to the Preset Tactics tile and scroll down to Advanced Instructions. Once there, you’ll be presented with a litany of tactics that could turn the tide of a game in an instant. Experiment to see what works with your side: There’s options such as attacking full backs, rotating wingers, playing false nines and, on the defensive side of things, full-on counter attacks, a deep defensive line and, if you want to go full on Jurgen Klopp, there’s even the ultra-draining Gegenpress for you to try out. Map these to the four directional buttons and press them while holding L2/LT during a match for you to activate them. Easy-peasy – and you’ll have your opponent on the back foot in no time.

5. How to defend the low cross

As I mentioned in my review, the AI sure does love the low cross this year. So much so, that you can begin to expect when exactly they are about to pull out the cheapest trick in the book.

To at least stop some of the low crosses getting into the area, there are a few things you can try out. First and foremost, try and show each winger ‘inside’, meaning there’s less chance of them to get to the byline and whip in a low, teasing cross. If that fails, be sure to hold R1 and X to get some additional help from a nearby defender. Crowding the player on the wing can at least ensure a greater chance of you blocking the low cross.

The first touch can be a bit of a pain this year if you’re not used to it going in. Those who have already played the PES 2019 demo will have a rough idea of what to expect but, for the rest, it could prove to be a tricky hurdle to navigate in the first few matches.

To help alleviate your struggles, do as the professionals would: start training. Here you’ll be able to take as much time as you want with certain drills under very little pressure. Use the advanced headers and volleys challenge for attacking scenarios, and pretty much any other drill for first touch anywhere else on the pitch. Using a, let’s just say, far less technical side will also pay dividends because, when you’re controlling better players, you’ll already be shaving off that extra few seconds of close control, making your play that much quicker.

7. Real kits and badges are still PS4 and PC-only

If you want a change from the Man Reds and South Norwoods of the world then, unfortunately, Xbox One is still left out in the cold when it comes to PES 2019 option files. Future mod support may yet be coming for the platform but, right now, your best bet if you want all the real kits, names, and badges is to buy the game on PS4 and PC.

I’ve always struggled with free kicks on Pro Evo. It’s a far cry from FIFA’s gloriously curling efforts that always seem to nestle in the top corner. PES 2019, though, appears to have changed that somewhat. A simple bit of swerve (typically away from the keeper’s reach and over the wall) and roughly two-thirds of the power bar being filled up should get even average players become set-piece specialists in no time.

Looking to try something different? Then here are the 11 best current football games that aren’t called FIFA or PES.