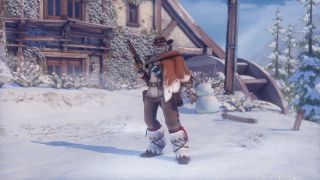 Blizzard has detailed a new Overwatch patch currently live on the PTR that deals out substantial nerfs and buffs to a variety of heroes. Chiefly, McCree has been buffed from 200HP to 250HP, while Baptiste is getting his primary and secondary fires nerfed.

Baptiste's primary fire will now take .45 seconds to recover, compared to .36 seconds before the update. Likewise, his secondary fire's heal explosion is being reduced from 60 to 50. Other highlights include a reduction to Hanzo's Storm Arrow damage from 70 to 60, reductions to Sigma's primary fire range from 22 to 20 meters and Accretion explosion damage from 60 to 40, and a reduction to Reaper's healing from 40% to 30% of damage dealt.

Perhaps the biggest surprise here is McCree's 25% HP increase, not to mention a change to Deadeye that unlocks your aim when firing. Granted, Peacekeeper's recovery time is being increased from .42 seconds to .5, but that's a compromise most McCree mains will gladly accept given the massive buff to HP.

The patch is available now on the PTR for PC players, but is likely on its way to the PS4, Xbox One, and Switch versions. You'll find the complete patch notes with every nerf, buff, and bug fix here, and you can voice your support or frustration for the patch over on Blizzard's PTR Feedback forum.

With the follow-up on its way this year, Alyssa explored how Overwatch 2 will redefine the video game sequel and shape the conversation in 2020.