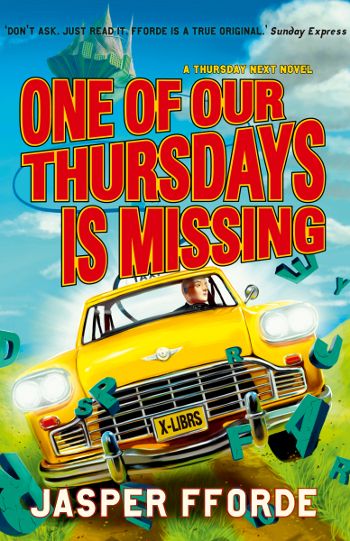 Thursday is back! Except she isn’t. Not quite. Anyone expecting Jasper Fforde‘s first BookWorld novel since 2007 to return to the old formula is in for a shock.
Previously on… Thursday Next is a real-world literary detective who can leap into the imaginary Bookworld where novels are created and maintained by self-aware fictional casts. It’s all a lot more complicated than that – involving literary gags, croquet, dodos and George Formby – but we have a word count to stick to.
This time there are big changes. The story isn’t related by the “real” Thursday, but instead by the "written” Thursday – the fictional BookWorld character who plays her in the novels. Which must be extra-meta-post-modern. Or something.

The real Thursday’s gone missing, so the written Thursday has to solve the mystery. Most of the story is spent in BookWorld, which, at the very beginning of the novel, undergoes a complete makeover to become more “geographical” (and, you assume, more interesting for Fforde to write about). It is now a less amorphous place (though still pretty malleable) with islands devoted to various genres (there’s even one devoted to sick notes).
Fforde has fun with some more esoteric genres this time round; fan fiction plays a role (there’s a brief mention of Hobbits fighting Daleks), while Vanity Publishing and Racy Fiction are pivotal.

Once again, it’s jam packed with ingeniously witty ideas and puns so bad you have to love ’em (the Toilet Humour Society meet at the Inn Uendo to pass motions at the bar). The story is pacy. The mystery is intriguing. You skim merrily through the pages like a sightseer on a tour of beautifully-constructed comic prose. There are also some cunning in-jokes for long-time fans, especially a revelation about the Toast Marketing Board.

But for all the fun, there’s something slightly dissatisfying about One Of Our Thursdays... It’s all too unremittingly plot-lead. It’d be nice to care about these characters rather than just be amused by them.

Also, by setting so much of the story in BookWorld, Fforde by default forces the reader to think more about how this world functions, then shamelessly fudges some of the answers. The less we knew, the easier it was to just accept. It’s not a debilitating fault, but he does lose some suspension of disbelief when your mind start mulling over random thoughts like, “What if people are reading these books at different times or speeds?”

A superior Chinese takeaway of a novel.