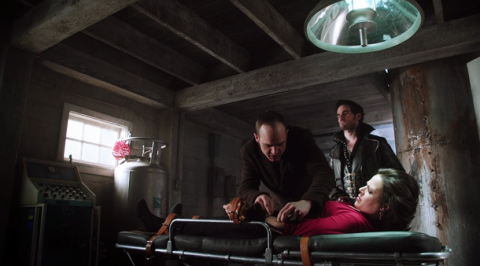 Once Upon A Time 2.21 "Second Star To The Right" TV Review

THE ONE WHERE In the past: we see what happened to Bae when he released his dad's hand and fell through the portal. He landed in London and found himself part of the Peter Pan fairytale, living with the Darling family before being taken to Never Land by an evil Shadow. At the last minute he escapes and is rescued by Captain Hook. In Storybrooke: Regina is tortured by Greg, who wants to know where his father is, while Emma tries to convince Neal that Tamara is evil. They finally confront her as David and Mary Margaret rescue Regina, only for Tamara to throw a magic bean at them which opens a portal. Neal, who's been shot, falls into it, much to Emma's despair. Later, Regina informs her rescuers that Tamara and Greg now have the “trigger” to destroy Storybrooke.

VERDICT Wow, poor Neal really does have terrible luck when it comes to inter-dimensional portals, doesn't he? Hopefully his adult self will land somewhere friendly and he'll have his wound seen to – although the realms of magic aren't exactly rife with penicillin, as has been noted before on this show, so could his days really be numbered? Meanwhile, young Neal, aka Bae, has the good fortune to break into the Darling household on the lookout for food, before being adopted by them. That's proper fairytale wish fulfillment, and his new family are very lovely – as well as being gloriously British. In fact, there are so many shots of Big Ben in this episode that it almost becomes a parody of itself, but we're not complaining. Victorian London is brought to us with the kind of nostalgic, Victorian feel that never existed in reality, but it works beautifully here.

Meanwhile, in Storybrooke, poor Regina is given electric shock treatment by Greg and you feel very sorry for her – although remember how we saw her kill an entire village full of innocent people just last week? Yes? She deserves a few zaps, then. Greg is the villain of the piece this week, but just when he seems one-dimensional and dastardly, Regina tells him that she killed his dad and he goes off to dig up his bones to see if she's lying. Sadly, she isn't, and it's a hard heart that isn't moved by Greg's grief when he finds his dear father's skull. Regina really is a murderer, so who's more evil here: her, or the people who kidnapped and tortured her? Tough call.

Also, what's this “Home Office” Greg and Tamara keep going on about? Is there some sort of Anti-Magic Central that controls everything they're doing? Additionally, the plotline about Regina's spell-failsafe, which will wipe out Storybrooke when triggered, seems a little rushed and it's hard to feel threatened by it. Perhaps next week we'll get a sense of what that's all about.

“KISS MY BOOTS” Oh dear, it seems that Gold and Belle, known now as Lacey, have joined forces to become the town bullies. We see them threatening Dr Whale (check out the fantastic camera shot!) and generally being gits, although they seem happy enough being nasty together. It's interesting that Gold later tells Lacey that someone in Storybrooke is a threat to him: will he ever trust her enough to reveal that it's Henry?

PERSIL WHITE Wendy returns from Never Land because the Shadow doesn't want her there – he prefers boys (we won't comment on that rather worrying preference). She talks about all the things she saw while she was there, but funnily enough her nightie is spotlessly white, as are her shoes. Did she get cleaned before she left the island? Or did she avoid treading on, well, anything?

DID YOU SPOT? The window in the Darlings' nursery contains a stained-glass ship that looks similar to the Jolly Roger. Foreshadowing, perhaps?

CRYING GAME There's a brilliant exchange when Mary Margaret and David ask Gold for help and he produces a magic vial to help them:

Isn't that wonderful? He's so devious and full of schemes that he's actually managed to set aside one of the Evil Queen's tears just for a moment like this. You've got to love the Dark One! Also, we're very impressed that he tells Mary Margaret to cry and she sheds a tear on command after barely any thought. She should be an actress.

CRYING GAME 2 It's not surprising that Gold had one of Regina's tears squirrelled away: she cries a lot. There's even a Tumblr site dedicated to her tears.

RUINING OUR CHILDHOODS Will any of us be able to read or watch Peter Pan again without thinking about how this show has made his disembodied Shadow evil? It's really spooky how it tries to steal Wendy's little brothers. Brrr.

WAS IT JUST US, OR... Did anyone else wonder how Tamara knew that Neal was walking along the beach looking for her? Did she have him bugged? She always seems to turn up just in time to not look suspicious.

TRUE LOVE It's always the way. Two characters dance around each other for most of the season, then finally admit they love each other just as one of them has been shot and is about to fall into an inter-dimensional portal opened by a magic bean. D'oh!

DOG WEAR While getting ready to battle the Shadow, the Darling children prepare Nana the dog by putting a Captain's hat on her. Bless.

MIRROR IMAGE Last week Snow tended to a wounded Queen by mopping her brow. This week she does exactly the same thing. Will Regina actually be thankful and forgive her this time? Yeah, probably not.

Snow: “We need your help. Regina's missing and we think she may be in danger.”
Rumple: “Just the way I like her.”

Tamara: “Magic does not belong in this world. It's unholy. We're here to cleanse this land of it.”