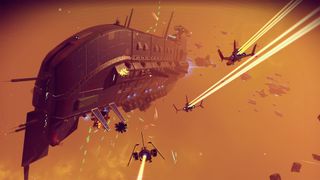 What is it about space that brings out the Machiavelli in people? There’s the factionary warring of EVE Online, the ideological statecraft of Elite: Dangerous, and now - in what might come as a surprise to some - the galactic institutions actively governing the procedurally generated expanses of No Man’s Sky.

The reason that might be surprising is that, upon its release, Hello Games’ indie passion project was criticised heavily for its disappointingly shallow complexion, especially after the studio had promised the world (or 18 quintillion of them) in the lead up to launch. Where were the dynamic resource wars? The elaborate trading networks? The diplomatic space factions?

Whether a result of unrealistic expectations or mixed messaging, No Man’s Sky was not the sci-fi flavoured politics sim that many might have been expecting, and that was just another factor feeding into the negative reaction the game received in 2016. But things have changed since then. Big time.

While many have now moved on to new games and more satisfying pasttimes, a dedicated subset of players stayed behind, continuing to uncover more layers in No Man’s Sky’s  infinite universe through hard work, communication, and a lot of their freely given hours.

Over time, the community coalesced into something that began to look less like a nebulous constellation of lone explorers and more like an in-game manifestation of the United Nations. By April 2017, the United Federation of Travellers was officially founded, and it’s gone on to become one of the most fascinating virtual organisations operating in video games today.

The Federation describes itself as an “interstellar, intergalactic federal republic” made up of various “civilisations”, which are essentially communities and zones in No Man’s Sky dedicated to organised cooperative play. While the UN has three founding pillars which defines its identity and purpose (peace and security, human rights, and development), the Federation has four, which together can be read as the body’s official motto; “To document, aid, create, and communicate.”

In other words, Federation members work to document all their No Man’s Sky discoveries into one central Wiki, aid in the establishment of new civilizations and hubs, create environments conducive to further cooperation, and communicate as official channels of interaction between civilized space zones.

Conor is a General Moderator for one of the Federation’s largest and oldest civilizations, the Galactic Hub, and adds that the “prime directive” for the organisation is “to unite civilizations behind universally beneficial goals without hindering any sovereign civilization's customs or practices.”

Conor points to Unification Day 2017 as the best example of the Federation’s impact in No Man’s Sky, hailing it as “probably our most tangible grand achievement [in which we] successfully planned No Man's Sky’s largest multiplayer event to date, with dozens of people attending, exceeding the game's ‘16 players per [solar] system’ limit a few times over.”

King Hova, a founding member of The Federation explains that the organisation also acts as a sort of virtual deliberation chamber “where Ambassadors and leaders come together to do their best impression of space politicians. Most of the time we get along, other times we don’t and wind up having to wipe a civilization or two out of existence.”

There are 26 of these Federation member civilizations in total, and each has a vote in matters relating to civilized space. Think of the way in which decisions are made by politicians in the British Parliament or US Congress, and you get the idea. Earlier this year, for instance, a majority of members voted against a proposal to implement a fixed Galactic Standard Time across all Federation zones in No Man’s Sky.

What’s more, all member civilizations have their own sigils, traditions, in-game jurisdictions, and functions, which gives plenty of choice to new players looking to find the right home for potential citizenship. For example, the Alliance of Galactic Travellers are a nomadic group of explorers who focus on discovery, never staying in one place but using freighters as mobile homes to continually escort them around their occupied AGT Nexus system.

Alternatively, the Spacing Guild are a service-based network, committed to assisting other players by visiting planets and offering advice, resources, and other forms of practical help. The Federation’s ‘hands-off’ policy means each civilization can pursue these different interests freely, so long as they contribute to the goals outlined by the Four Pillars in doing so.

There are a number of civilizations that exist outside of the Federation too, and while peaceful relations with non-members are generally encouraged, it is here where conflicts have broken out amongst the No Man’s Sky community at large. For example, after being expelled from the Federation as a result of antagonistic conduct in November 2017, the Vestroga Hub found itself under attack by the Empire of Hova, a militaristic Federation member that had recently been threatened by a Vestroga Ambassador.

The 10 best sandbox games you can play right now

Of course, players can’t really interact with one another in No Man’s Sky, let alone wage full-scale warfare, so galactic conflict is practiced using the game’s primary language; discovery. Citizens from the Empire of Hova invaded the Vestroga Hub’s star cluster en masse, and began to claim every undiscovered system and planet within it, even going so far as to name them with deliberately provocative titles like “Vestroga Falls” or “Hova’s Victory.”

This made it so difficult for the Vestroga Hub to navigate their territory that they had to abandon it altogether, and by securing the victory, Hova set a new precedent for No Man’s Sky’s civilized space, proving that aggression is a viable means to achieve one’s goals in a game that was previously thought to be lacking in any form of PvP.

And this is exactly what makes No Man’s Sky’s civilized space politics so interesting. Players are interacting in ways that Hello Games presumably never even imagined was possible, using every available grain of sand in this wholly unique sandbox to construct intricate political complexes and live out their own epic sci-fi stories where the game’s barebones narrative fell short. Thanks to bodies like the Federation, what was once lambasted as a surface-level survival game now has a wikipedia hub so comprehensive that you’d think it belonged to a decade old MMORPG.

To infinity and beyond

Andy Krycek is another Galactic Hub Ambassador, and tells me a little about what it’s been like to see No Man’s Sky evolve in such unpredictable and exciting ways over the last two and a half years.

“I can say for certain that the Federation has made the community within the game a lot closer”, he explains. “We have our ups and downs, that sometimes lead to conflict, but mostly it provides a way forward for small, up and coming civilizations to grow themselves and to entice other players to join them.

"Whether they are lore based, farming based, warmongers, or people who just like to relax, the Federation will always try to help them get started and to make sure they follow the not too strict rules. It certainly brings a whole other side to a video game with seemingly no multiplayer. We all have great fun, even in conflict-times.”

To conclude, here’s Devoid 666, the Ambassador for the Federation-affiliated Discovery Coalition (a “non-localized civilization”... I told you it’s complicated) with one of the best summaries of how civilized space has changed No Man’s Sky for the better.

“This game has provided me with an experience I’ve never had with any other: the chance to change its history.” he tells me. “We at the Federation make our own history, and we’ve helped shape the game into what it’s become, simply by existing as a force in the universe.

"It’s the only game where I’ve ever felt I have a life I live outside my own, within an ever-changing simulation that I personally can make change within. That’s it’s appeal, though it takes a specific kind of person to enjoy it the way we do.”

Certainly, with No Man’s Sky Next and an Xbox One release on the horizon, the civilized space community has a lot to look forward to, and their continued growth and evolution might just reignite your belief in the grand potential of No Man’s Sky once again.

Learn about No Man's Sky new features from the 2017 Atlas Rises update and discover how No Man's Sky has improved since launch.