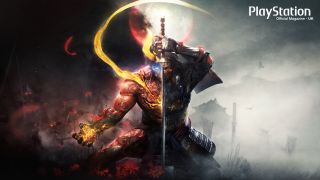 We've done this dance before: steel clashes against steel, and we're keeping a close eye on our stamina-dictating ki as we unleash strings of attacks, dodging just out of reach of enemy strikes. But Nioh 2 improves not just on the first game but on the Soulsborne genre in general.

The three stages we get hands-on with are meaty and intricately designed, massive areas full of looping pathways and hidden shortcuts, from trails that lead back to safe shrines where we can rest, to dams that not only provide bridges to progress but reveal previously submerged caves where secrets await. There's always something new to see, though dangerous enemies, human and demon alike, guard anything of interest.

Working our way through these sizeable stages feels smoother and slicker than ever, and the combat is incredibly diverse. Every weapon type has three stances (low, medium, and high), which vary in power, but also in movesets. The more you use each weapon, the more skill points specific to it you earn to unlock more advanced moves – yes, each weapon has its own skill tree, making you genuinely feel like you're mastering each one. Things like the kusarigama chain and scythe have fantastic animation details as you switch between stances and your character begins to swing more and more of the chain in threatening fashion.

All the weapons from the previous game are back, and new to Nioh 2 are the dual hatchets and the switchglaive, which feel like well-thought-out additions. The former allow for quick strikes and plenty of throwing attacks, and the latter has tremendous reach. Some weapons now feature yokai forms too, transforming into powered-up versions for a limited time. When this happens in our hands- on, we can really feel the increase in damage our demonic weapon is doing.

Yokai moves that you can earn from felled yokai are another addition, essentially allowing you to use the monsters' powers. These strong moves, such as summoning a massive ghostly hammer, can really help out in a pinch. You can also unleash a brute spirit move to counter certain charged enemy yokai attacks, which really gives you the sense you're turning the tide on these powerful creatures. This is all thanks to your custom character's affinity with the demon realm, which also means you can Yokai Shift to become one yourself for a limited time. You feel you're not just fighting these huge hulking creatures against the odds, but are capable of going toe-to-toe with them on the same level.

That said, often you'll just have to admit that against these hordes of demons you're going to be outmatched. In our time with the game, the first stage evens this out by allowing us to team up with an NPC. This is also our first time playing with a server switched on, which allows us to sample the improved online offerings. You don't just fight the spirits of other players who died for loot, you can summon benevolent versions of them – giving you an AI-controlled version of another player's character build. All you need to summon a friendly ghost is ocha tea, which you earn by fighting the malevolent player spirits.

Ocha tea can also summon real-life human players, and it is great fun to call on the aid of up to two other gamers. As with any Soulsborne game, this is what can really help in a pinch, and there's a lovely sense of silent co-operation as you communicate with gestures to forge through tough areas laced with fearsome demons.

While Nioh 2 is absolutely still the 'masocore' title the first one was, the new yokai abilities and improved online play make us feel like we have even more power. Areas that appear overwhelming can be bested a lot more easily with someone else there to help you out. It's an aspect of the Soulsborne games that some overlook, but an integral one.

The genre isn't just about presenting tough-as-demon-meat challenges – it's about overcoming them, whether that's by nailing an enemy attack pattern, becoming a monster yourself with your own combo option, or teaming up with other people online. And cooperation is in the DNA of the genre. It's great to see this expand into the AI-controlled spirits, as it solves the problem of how devs can keep a game in this genre going even when the player base falls off. Not that we find that's a problem during our time with the game – people are more than happy to jump in at a moment's notice and stand by our side as we ready our axes to delve into the darkness.