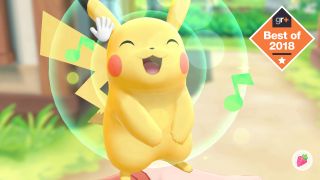 If 2017 was the year Nintendo felt it had something to prove with the Nintendo Switch – maintaining the momentum of its launch with a major game release every month – then 2018 was the year it didn't. It could relax, get experimental, get weird – and Nintendo always excels with weird.

If the Switch is anything, it's odd. We're all used to it now, such is Nintendo's success at establishing its signature hardware as a viable competitor to the juggernauts of PS4 and Xbox One, but we're still talking about a hybrid console with numerous input and control mechanisms, which can be used at home or on the go to play the exact same games, and with strange detachable controllers with multiple configurations. Yet here at the end of 2018, it feels like an indispensable addition to any gamer's arsenal.

That weirdness was evident in what was arguably Nintendo's most ambitious launch of the year – Nintendo Labo. The cardboard construction sets are unlike anything offered by anyone else, nor could they be. Nintendo's strange experiment wedded the complex technology wedged into the Switch's Joy-Con controllers with the decidedly low-tech experience of glorified origami.

It's a gamble that shouldn't have worked, but the payoff was one of the purest expressions of Nintendo's genius in years. Nintendo simply gets the joy of play like few others, and Labo is the realisation of that – but in real space as much as through the virtual worlds provided by video games. The real stroke of genius with Labo though was retro-fitting existing games, such as Mario Kart 8 Deluxe, to take advantage of the cardboard kits. Folding up a racing rig may not be a hardcore or adult player's idea of a good time, but for younger players and families, it's proven an incredible new way to play.

While 2018 wasn't filled with the same pace of major, first party releases, there was certainly no lack of choices for players. Better still, Nintendo enjoyed the greatest level of third-party support it's seen in years, thoroughly banishing memories of the Wii U's software desert.

From Ubisoft's Starlink: Battle for Atlas (also the best Star Fox game by stealth) and Capcom's Mega Man 11 to Sega's Valkyria Chronicles 4 or Team17's Overcooked 2, to be a Switch owner in 2018 was to be almost drowned in excellent, diverse software. It wasn't just major publishers and developers embracing the hardware either – the push for 'Nindies' continued, with the library of independent, often digital-only games available on Switch massively expanding.

The Switch has also continued to benefit from upgraded ports of several Wii U games, such as Hyrule Warriors, Donkey Kong Country: Tropical Freeze, and Captain Toad Treasure Tracker. It's a solid approach, allowing the significantly larger user base who own a Switch to experience great games that were missed because they were hidden away on the earlier console. This trend looks to continue into 2019, with New Super Mario Bros. U Deluxe kicking off 2019.

Of course, Nintendo itself still had some tent poles to keep the faithful happy. Pokémon Let’s Go proved a delightful and innovative take on the original Pokémon Red and Blue games, with a surprisingly pleasing incorporation of mechanics from mobile hit Pokémon Go, while Mario Tennis Aces provided a fun but flawed return to Mario's various sporting careers.

2018's undisputed titan for Nintendo was Super Smash Bros. Ultimate though – the sole focus of entire Nintendo Direct broadcasts and a huge part of the company's E3 presence. The focus paid off though, with the game going on to become the fastest-selling Nintendo home console game of all time in Europe. It's already crushed launch sales records set by the likes of The Legend of Zelda: Breath of the Wild and Super Mario Odyssey. Expect Smash to continue to be a major part of Nintendo's 2019 plans, with more characters and stages set to join the game over the next year.

However, Nintendo's 2018 hasn't been entirely smooth sailing and sales chart dominance. The undoubted low point has been the underwhelming rollout of the Nintendo Switch Online service in September. Promised since before the console's launch, upon delivery Nintendo's answer to Xbox Live or PlayStation Plus simply doesn't yet hold a candle to its rivals.

The biggest problem is that Switch Online is confusing. Like the competition, it's now necessary for online play, but some games, like the behemoth that is Fortnite or other free-to-play titles such as Warframe, are exempt from that requirement. It furthers the uncertainty over digital ownership and saved game data, with cloud storage for your progress introduced, but is the layman really clear on when and how and in what circumstances they can transfer their games to a new system? Nintendo's messaging has been consistently poor on this, and is the one area it most desperately needs to improve in.

The catalogue of NES classic software available exclusively to Switch Online subscribers is undoubtedly a nice benefit, and the addition of online multiplayer to many titles is a brilliant tweak many players probably never even considered. It's a double-edged sword though – yes, many of these games are timeless, but Nintendo has the richest back catalogue in gaming. Yet for years, whether through the Virtual Console or with individual re-releases, its retro offerings have been obsessed with its 8 and 16-bit era glories. A more rounded offering, tempting players with gems from N64 or even GameCube, would have made Switch Online a must have.

There's no knocking the price point of the service though – at a bargain £17.99 for a year's individual account, or £31.49 for an eight-account Family membership, it's significantly cheaper than its rivals. If Nintendo wants to build its subscriber base through 2019 though, it really needs to do more to make the benefits more obvious.

Elsewhere, 2018 was the swansong for the 3DS. Nintendo still maintains that the Switch, despite being equal parts handheld and home console, isn't a replacement for the 3DS family of devices, but looking back at the last 12 months you'd be hard pressed to agree with the House of Mario.

Catch up on the best

The first iteration of the 3DS launched in 2011, and while it's enjoyed several form factor and technological upgrades (and even, technically, a downgrade, with the slate-like 2DS arriving in 2013) it's near impossible to maintain sales momentum or player enthusiasm on such ageing hardware. Nintendo tried to keep the 3DS going this year, and admirably so – titles such as Detective Pikachu and WarioWare Gold are no slouches, and it's been a delight seeing the Yo-Kai Watch franchise expand with both the Blasters spin-offs and new core entries grace the handheld this year. It's undeniable that 2018 brought a significant slowdown to 3DS releases though, with much of its line-up consisting of remakes – particularly of niche JRPGs – and, oddly, a lot of pinball games.

To add to all that, it's already known that what would be the system's biggest hitter – the next core Pokémon game – will be moving over to Switch. So, while Nintendo still has a few games lined up for the 3DS family next year, 2018 may be looked back on as the last year the plucky handheld with the nifty visual effects really stood out.

While rumours continue to circulate that 2019 may see an enhanced Switch arrive, much like the New Nintendo 3DS gave a hardware boost to the 3DS, right now such an overhaul almost looks irrelevant. 2018 wraps with Nintendo having cemented itself once more as a comfortable and confident pioneer, and whether it's offering players massive AAA traditional titles or fancy interactive cardboard, the games industry as a whole is stronger for it.

Want to see how Sony's console stacked up? Here's our PlayStation 2018 Year in Review.