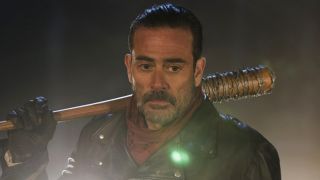 He may be a real mean SOB, but The Walking Dead's Negan is a fan-favorite already. But what's his deal? Where did he come from, why did he name his bat Lucille, and how did he rise to become the leader of the Saviors? If you're wondering when the show will answer these questions, showrunner Scott Gimple has an answer for you: soon. Maybe.

"I do believe yes, it’s in the future. You know, I’m always careful about this, [because] things can absolutely change," Gimple recently told Yahoo. "There’s a loose plan in place I have." Hey, I didn't say it was a satisfying answer. Like anything related to TWD these days, everything's a tease. But here's some legitimately good news: you can figure out some of Negan's history right now.

Pick up the April copy of Image Plus magazine and you'll find "Here's Negan," a mini-comic written by The Walking Dead comic creator, Robert Kirkman. Seven of the 12 planned installments have been released via Image Plus thus far, offering plenty of insight into this charismatic villain.

And while the comic book universe and TV universes can often differ, Gimple told Yahoo that he considers Here's Negan to be the definitive origin story. So whenever TV Negan's backstory is revealed, it'll likely follow the same beats as Comic Negan's tale. In any case, the dude is one tough and scary bastard.