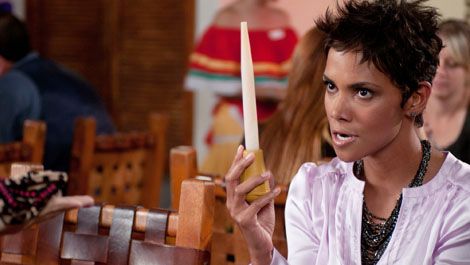 Quite why A-listers Kate Winslet, Hugh Jackman and Emma Stone (among others) aligned themselves with this excruciatingly moronic compilation of shorts is anybody’s guess.

Dealing in piss, poo and period gags that your little brother outgrew by 15, Movie 43 follows three kids as they scour the internet for the elusive (and very possibly made-up) flick of the title.

As their search vomits up one cringe-worthy skit after another, Movie 43 amounts to little more than filmic self-flagellation for all involved.

Winslet’s on a date with Jackman, only there’s something wrong with his neck. Naomi Watts and Liev Schreiber home tutor their teenager, but get it all wrong. Anna Faris proposes to Chris Pratt, but not how he expected.

As the fake tits, genitalia jokes and (literal) excrement pile up, the most shocking thing is that not once during Movie 43 ’s four year production did producer/director Peter Farrelly stop to consider that, just maybe, his film was about as funny as losing your virginity to your own mum. (Yes, this actually happens in Movie 43 .)

Worst of all, Farrelly’s film just never knows when to give up, subjecting audiences not only to a never-ending credits sequence gag reel, but yet another post-credits short starring Elizabeth Banks. She gets pissed on by a cartoon cat.

Expect Movie 43 ’s only genuinely funny moments - two faux ads for Tampax and children enslaved to a life working inside cash machines - to end up on YouTube in the near future.

For everybody else, though, this is a great, huge stinker of an embarrassment on their CV. “It makes you shit out your intestines,” warns JJ (Adam Cagley) right at the beginning. He’s not far off.