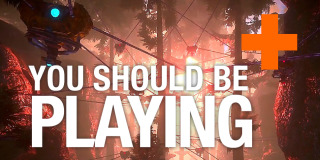 A "walking simulator" that trades the walking for blazing-fast momentum, gravity-defying leaps, and grappling hooks.

Stories grounded in the real world but with a touch of fantasy, or games where you just gotta go fast.

Valley begins with a yawn. Its introduction is, in a word, boring. Strange way to open an article about games you should be playing, right? Well stick with me, because Valley has to start this way; it's what makes the remaining 95% of the game work so well.

An exposition-laden voicemail left on your answering machine gives you everything you need to know about who you are (an archeologist) and what you're up to (searching for an ancient mystery, a la Indiana Jones). Not exactly the most original premise. And once you take control of your character, gameplay seems to be just as uninspired. You begin walking, quite slowly, down a linear path.

Oh sure, the scenery is nice - you're wandering through the Rocky Mountains after all - but if you didn't press on, you'd be forgiven for thinking this was going to be just another "walking simulator." That's when you come across the Leap Effortlessly through Air Functionality (LEAF) suit. This exoskeleton lets you bound across the landscape like a Kryptonian deer, leaping across huge chasms and sprinting across fields at inhuman speeds.

The disparity between the opening and the rest of the game is huge, and that makes it all the more satisfying. You'll go from being frustrated by your slow speed to exhilarated by your new sense of power and mobility. It's a joy to simply move around the landscape and feel the rush of momentum. But the LEAF suit isn't just there to turn you into a human version of Sonic the Hedgehog - it also has the ability to control life and death. Blast a dead tree or animal with your suit's special cannon and you'll bring it back to life; shoot something that's alive and you can steal its life force.

You'll need to balance both to succeed. Some paths will only open when specially-marked trees are brought to life, and many of the game's secrets are likewise hidden behind paths that can only be accessed when the valley is healthy. But several of your suit's abilities (including the one that lets you give life) cost energy. Sometimes you'll be able to find energy scattered about the environment in the form of glowing orbs, but the most readily-available sources are the flora and fauna around you.

You'll have to decide: do you sacrifice the health of the environment for your benefit, do you give life and save little energy for yourself, or walk a path between the two? It's a far more interesting dilemma than your standard Good vs. Evil morality system, and it holds whatever weight you give it. I'm a bleeding heart hippie, so I went out of my way to make the valley flourish. But if you don't mind being surrounded by death and decay, nothing's stopping you from stealing the valley's essence for yourself.

With such ludicrous powers at your fingertips, it should be obvious that Valley is not exactly striving for realism. The plot weaves together ancient civilizations, world-ending artifacts, forest spirits, mad scientists, and World War 2. It's a pulpy, silly story, tossing out words like "Lifeseed," "Susurrus," and "Deamon." But it's also a tale told with confidence, and much like its manipulation of life and death, it asks you to consider the consequences of your actions.

And to think, your trip into the valley started so boring.