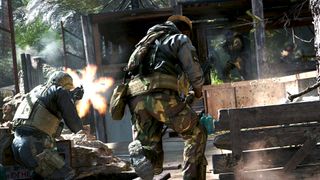 Call of Duty: Modern Warfare and its starring multiplayer mode, Gunfight, rewards confidence and caution. The news in mid-January that it was growing from 2v2 to 3v3 inspired a little of both. Confidence, because multiplayer modes rarely go bigger. Ordinarily, developers are looking for ways to consolidate a dwindling player base in the months after launch, not expand it outwards. Infinity Ward clearly feels like it's in a solid enough position to try.

Caution, because it seemed that Gunfight might be changed for the worse by its new scale – like a scrappy punk band joining a major label and losing the garage vibe that made it so beloved to begin with. In 2v2, Gunfight had matched the single-player campaign's Clean House for claustrophobic closeness. Not only were its maps small – smaller than any Infinity Ward had designed for Call of Duty before – but few enough players walked them that you could distinguish every footstep, and hold a mental map of your enemies' last known positions in your head.

With even two more players in the mix, that careful process of watching and listening for the little signs that might give an opponent away threatened to turn into a cacophony, an unreadable space filled with constant noise. Infinity Ward has sometimes called Gunfight a "cage fight", and I feared it would finally become one, rather than the compact stealth experience I'd come to love.

The studio pitched this new change as "same maps, same rules, more mayhem", and there's no doubt that Gunfight is more chaotic in 3v3, especially in Atrium, a new map no bigger than a studio apartment in millennial London, or a walk-in wardrobe in oligarch London.

But though contact comes quicker, and it's easier to be blindsided, that quintessential Gunfight-yness remains. Which has brought me to realise that it's not the size of the party that makes the mode work, so much as the psychological meta.

In the seconds before a round of Gunfight begins, I like to look at the randomly assigned weapon in the primary slot and work out how it's going to influence my enemies' behaviour. If everyone's been given shotguns, then I can be sure their instinct will be to rush forward, which should leave them vulnerable to flanking. Or, if they're handed sniper rifles, they're less likely to expect close quarters aggression. Unless of course they've engaged in the same thought process, know exactly what I'm thinking, and plan accordingly. It's rock-paper-scissors, except that a cunning opponent might decide to use their scissors like a rock just to mess with you.

The game is lent a further mental dimension by its permadeath. In an average round of Call of Duty, it's impossible to track the position of a dozen players who are continually respawing, teleporting halfway across the map as they do so. In Gunfight, by contrast, the visual and audio intelligence you gather has real value, and the gaps in that knowledge become dangerous. As in XCOM or the Alien movies, not knowing the exact position of your enemy is a source of terror – especially when they might know yours. Is that moving shadow a flapping tarpaulin on a shipping container, or a creeping killer?

This is where that confidence comes into play. Since the odds tip dramatically the moment one player is down, the battle is to keep it together while the other team takes the lead. A study into Dutch professional football in 1994 found that after a red card, the goal-scoring intensity of the opposing, full-strength team increases by 88% – almost as if their players are emboldened by the sudden weakness of their adversary.

It very much feels that way in Gunfight. Winning is less about who has the advantage than who believes they have it; whether you can convince yourself that you're the predator, not the prey. The rounds I lose are those where I clam up, waiting to be hunted down. There's nothing wrong with camping in Gunfight – it's balanced by a central capture point which appears if the round drags on too long – but winners camp with purpose, ready to pounce. The only way to conquer the dark is to own it, patrolling the map as if it's your own home and you're the only one with a right to be there.

Gunfight's power doesn't come from its tiny player count, then, as I first suspected. Instead it draws its intensity from the shared understanding that death is persistent, and that players can smell blood the moment it's spilled. It's played with guns, sure, but it's really a mind game.

Looking for more information on this year's Call of Duty? Then you may want to check out our dedicated Modern Warfare multiplayer review.