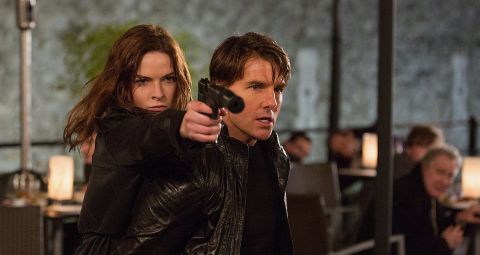 Christopher McQuarrie keeps the franchise fuse fizzing with machinations a go-go and some precision action.

Ethan Hunt’s fifth impossible mission starts with its much-publicised money shot: Tom Cruise clinging to the side of an Airbus A400M. For real. It’s a crazy stunt, and to front load the film with it is equally ballsy – audiences are sure to spend the next two hours waiting for it to be topped.

But if you want to know the true circumference of Cruise’s cojones, it’s evidenced in his decision to trust in storytelling, lovingly crafted set-pieces and suspense (all of it delivered in 2D) rather than wedge himself into a bombastic, CGI-bloated jamboree. Mission: Impossible – Rogue Nation might have its hi-tech gadgets, but it's a pleasingly old-fashioned affair.

The coherently tangled plot sees Ethan obsessing upon the existence of the Syndicate, a SPECTRE-like organisation comprised of supposedly deceased agents from all around the globe. Stick a pin in an international tragedy and it'll tell tale of the Syndicate. But CIA Director Alan Hunley (Alec Baldwin) thinks Hunt is paranoid, the Impossible Missions Force out of control.

And so Ethan, not for the first time, must go rogue, growing an unfeasibly bushy beard and calling on the surreptitious help of his trusty co-workers (Jeremy Renner, Ving Rhames and an impressive Simon Pegg, whose tech-head Benji is given much more to do) to track down his only link to the Syndicate – whispering, unblinking nutjob Solomon Lane (Sean Harris).

Naturally Ethan’s quest takes him to such far-flung places as Paris, Casablanca and London, while his modes of transport – always moving at breakneck pace, and sometimes travelling in reverse, or slaloming through traffic, or jolting down vertiginous steps – include cars, motorbikes and, of course, his own two feet; Cruise’s upright, arm-pumping run is as now iconic as John Wayne’s hip-roll slouch.

There is double and triple-dealing galore, much of it arriving via mystery lady Ilsa (Swedish actress Rebecca Ferguson in a terrifically poised, sensual and brutal performance; consider the gauntlet well and truly thrown down to new Bond ladies Monica Bellucci and Lea Seydoux).

Indeed, the Grand Guignol sequence in which Ethan and Ilsa first cross paths as two silhouettes working the wings and rigging of the Vienna State Opera while an assassination attempt plays out to 'Nessun Dorma', is M:I5's highlight.

With its fluid camera and choking tension, it recalls Brian De Palma's elaborate dances of death, and thus returns the series to its original instalment. Director Christopher McQuarrie (Jack Reacher, the screenplay of The Usual Suspects) is a classicist, and each of his set-pieces, including a breath-snatching underwater heist, possess a pleasing purity.

Mission: Impossible – Rogue Nation doesn't quite have the scale of Brad Bird's fourth outing, its villain can't match Philip Seymour Hoffman's franchise stand-out in J.J. Abram's part III, and Ethan Hunt continues to be little more than a startlingly capable cypher. But this is a fun entry in an enduring series that's never failed to deliver a lively night out, and you should accept it, gladly.

Christopher McQuarrie keeps the franchise fuse fizzing with machinations a go-go and some precision action.