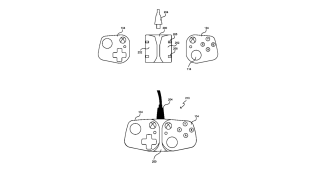 A patent for a new charging device suggests Microsoft may be looking to turn your smartphone into a mobile Xbox gaming system.

While the patent (thanks, Digital Trends) doesn't concern the smartphone controller device itself, and there are no specific references to Xbox consoles or branding in the documentation, details of a charging system for "removable input modules" – including images – sure do look like an Xbox controller to me.

Described as including built-in speakers, a headphone jack, and wireless headphones support, the controller itself comes in two halves that can each be clipped around your horizontal smartphone, looking not too dissimilar from the Nintendo Switch.

A designer from Yanko Designs, Sarang Sheth, has even mocked up up 3D concepts of the device, using the patent – which was filed last month – as a template.

"Designed for immersive landscape gaming, the controllers come with two flippers that hold your phone gently but securely from the sides, while memory-foam pads make sure they don't press any buttons," Sheth said in a blog post about the concepts. "These side flippers are ideal for phones with no bezel, because this makes sure the controllers don't overlap the screen from the left or right. Both halves of the controllers connect to your phone via Wi-Fi to deliver a seamless gaming experience that's absolutely lag-free.

"Based on patented designs, these conceptual Xbox Cloud controllers give us an idea of what the real thing would feel like," said the Yanko designer, intimating the controllers may only be compatible with Xbox Cloud games.

Microsoft isn't the only hardware developer filing interesting patents, of course. A brand new PS5 patent has emerged that sheds some light on how loading times on the PS5 are going to be distinctly shorter than those you'll currently experience on PS4.

Before Xbox Cloud arrives, why not check out our list of the very best Xbox One games out now?