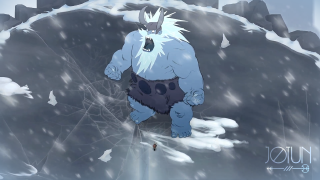 Let us face Ragnarok together, brothers! Be not afraid as we raise our glasses high and share a meady toast with Odin, Thor and all the gods on this day!

What is it about Norse mythology that's so intoxicating? Gods and vikings and Valkyries and endless battles followed by endless feasts; it's the game premise that keeps on giving. Jotun, newly released on Xbox One, PS4, and Wii U, is a boss rush adventure that taps into the lore in the best way. How did it get made? Creative lead Will Dube of Thunder Lotus Games joined us for a deep dive into the making of his gorgeous action game.