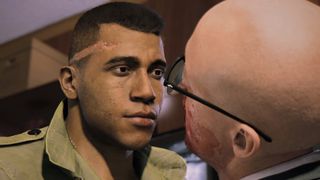 Lincoln Clay has a singular objective in Mafia 3: take down the Italian mob of New Bordeaux one cog at a time, until the whole Machiavellian machine collapses in on itself. But he'll have more ways to accomplish that objective than you can fit in the back of an unmarked van.

Speaking of unmarked vans, Hangar 13 and 2K Games uploaded their full Gamescom demo for Mafia 3 - and I've torn it up to show all the different methods Lincoln uses to snuff out cold-blooded bookkeeper Tony Derazio.

By timing his sneaky elevator rides with important phone calls

By not wasting a single pellet from his sawed off shotgun

By doing a goddamn lockpicking minigame