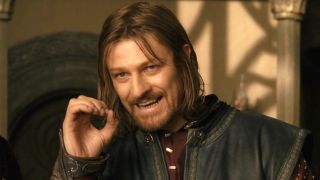 Last September Athlon Games announced it was working on a free The Lord of the Rings MMO. You'd be forgiven for not having the date and news etched into your memory, but the whole thing just got a lot more interesting with the news that Amazon - and its very deep pockets - is joining the project.

Amazon Game Studios - which has so far launched The Grand Tour Game and a number of Amazon App Store titles -  will "jointly develop the game for PC and consoles" with Athlon Games. We know from Athlon's original announcement that the game will be set way before all the shenanigans with Frodo Baggins and Gollum.

The Lord of the Rings TV show

There are a series of maps floating around on the Twitter account that hint when the series takes place, namely in the Second Age. The Second Age ended with the first downfall of Sauron (as seen in the prologue to Fellowship of the Ring movie), and before then the age saw the creation of the rings of power and Sauron's rise, so there's plenty of fascinating stories the Lord of the Rings TV show could tell.

"You won’t see human characters from The Lord of the Rings in our game," Dave Miller, president of Athlon Games, told Gamesbeat when the game was originally announced. "I wouldn't say it’s First Age because that is more gods and monsters." So you can forget about seeing a pre-pubescent Aragorn running around stabbing orcs.

“We’re committed to bringing customers games of the highest quality, both with our own original IP as well as beloved cultural pillars like The Lord of the Rings," said Amazon Game Studios' Christoph Hartmann in a statement.

"Tolkien’s Middle-earth is one of the richest fictional worlds in history, and it gives our team of experienced MMO developers – from the same studio developing New World – tremendous opportunity to play and create. We have a strong leadership team in place to helm this new project, and we’re actively growing our team to help build this incredible experience."

New World is a sandbox MMO currently in development at Amazon Game Studios - a 17th-century adventure that looks like it'll mixing crafting, co-operating with other players and... bear attacks? It's currently in alpha with a beta promised for the future. It's certainly easy to see how some of those elements could work in a fantasy MMO, and Amazon Game Studios does boast a staff of developers who have worked on game games like Everquest, Destiny, Planetside, World of Warcraft, Defiance, and Rift. Still, making a free-to-play game that lives up to the promise of J. R. R. Tolkien's books and Peter Jackson's visuals is going to be a challenge.

Ready for Amazon Prime Day? We're tracking all the best Amazon Prime Day game deals right here. Some online stores give us a small cut if you buy something through one of our links. Read our affiliate policy for more info.