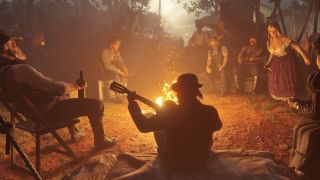 Your Friday is about to sound a lot more epic, because Rockstar has released the Red Dead Redemption 2 soundtrack on Spotify and Apple Music. The album isn't messing around either, with original tracks from names like D’Angelo, Willie Nelson, Rhiannon Giddens, and Queens of the Stone Age's Josh Homme.

These aren't just a bunch of tracks that Rockstar have plucked off the shelf, all of them are exclusive to the album. You can see the full track list below, but I'm a real sucker for Mountain Hymn by Rhiannon Giddens. (I'm not crying and thinking about horses, you're crying.)