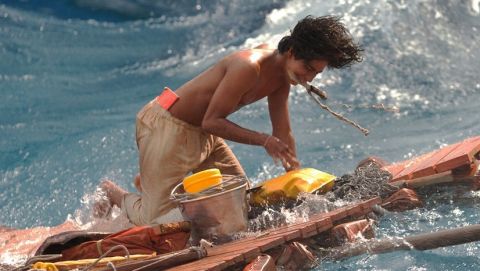 Adaptations of supposedly unfilmable novels are currently arriving at a rate of knots from smart, audacious directors: Cosmopolis , On The Road , Midnight’s Children , Cloud Atlas …

Cracking the most daunting literary codes has felled many an accomplished filmmaker, from Mike Nichols ( Catch-22 ) to David Lynch ( Dune ).

What’s more, the omens weren’t looking good for Life Of Pi , with one auteur after another in the frame then out of it (M. Night Shyamalan, Alfonso Cuarón and Jean-Pierre Jeunet).

But then Lee arrived as a shining knight, wielding superior pixel power and warm-blooded empathy. The Taiwanese director - who’s always had a knack for an adap ( Sense And Sensibility , The Ice Storm , Brokeback Mountain ) - has done handsome justice to Martel’s spellbinding 2001 fable about one boy’s supreme efforts to survive a tragic shipwreck.

Pi -hards will delight at Lee’s strict devotion to Martel’s prose, with only minor deviations to enrich the brew.

What he’s engineered is a lush, liquid 3D masterwork that delivers one breath-snatching image after another, kicking off with French India’s faded colonial grandeur and segueing into a tidal wave of marine magnificence: spectacular typhoons followed by turquoise serenity; the prodigiously-staged sinking of an animal-crammed freighter; a nighttime ocean aglow with luminescent sea-life…

Life Of Pi is a marvel of virtuoso cinematic artistry; it’s also a riveting tale of adventure and endurance, Lee deftly integrating sombre themes into his ocean vistas.

Pi is portrayed by three actors. Newcomer Ayush Tandon is the Indian boy growing up in family-owned Pondicherry Zoo, who reveals how he acquired his bizarre name and arrived at his all-encompassing embrace of three religions: Hinduism, Christianity and Islam.

Slumdog Millionaire ’s Irrfan Khan is award-worthy as the Toronto-dwelling adult Pi, recounting his story in flashback to Martel (Rafe Spall) in Lee’s most significant deviation from the source.

Last not least, bearing the brunt of the narrative, is Suraj Sharma as the teenage Pi, who leaves India for Canada with family and menagerie aboard the Japanese cargo ship Tsimtsum, only to watch it sink in a savage storm.

He’s left to fight for survival aboard a lifeboat, his fellow castaways an injured zebra, an orang-utan, a hyena and a ferocious tiger whimsically named Richard Parker. (Needless to say, this unmerry band’s numbers are swiftly whittled down.)

In his first acting role, Sharma proves to be both awesome discovery and mild disappointment.

The former because he rises valiantly to the challenge of bringing the resourceful Pi to life; the latter because Pi’s emotive musings on subsistence and enlightenment, expressed so movingly on the page, aren’t conveyed with as much potency through his performance. It’s a game, auspicious effort, though.

Pi’s feline tormentor, on the other hand, is a monumental creation, vividly brought to life with a mix of animatronics, CGI and reality. Like Caesar in Rise Of The Planet Of The Apes , Richard Parker is another bold leap forward for emotionally resonant digital characters: magnificent, frightening, heartbreaking, and an unceasingly compelling manifestation of wonder within the narrative tapestry.

Martel’s spiritually minded prose, which comes steeped in meditation and metaphor, tips its hat to God-belief while also striking a humanistic chord, maintaining an edge of ambiguity that allows both believer and atheist room for manoeuvre.

There’s a glut of big ideas to wade though in Life Of Pi . As Spall says at one point, “It’s a lot to take in, to figure out what it all means.” (To which the middle-aged Pi responds: “Why does it need to mean anything?”)

But metaphysical musings are more the icing on the cake, as the film also satisfies as an adrenalised, death-defying high-seas adventure.

Where Lee has tinkered, he’s done so with care and an eye to audience sensibilities: gone are the novel’s most horrific animal suffering, the obsessive minutiae of oceanic survival and a hallucinatory episode where Pi dreams up a conversation with Richard Parker.

While hardcore disciples might bemoan its absence, it was a shrewd move leaving it out: there’s enough magic realism here to satiate the greediest appetite. And besides, it probably wouldn’t have sat well with the film’s triumph-of-the-spirit dramatic arc.

As for the novel’s grimly repellent but resonant coda, it remains intact. Ultimately, it’s a tale that revels in unfettered imagination and the possibilities of storytelling, as well as the fierce avoidance of “dry, yeastless factuality” in life.

At times, the narrative gets a bit too misty-eyed at its own lofty purpose. Yet it’s possible that viewers will embrace Lee’s vision with the same fervour as Martel’s readers.