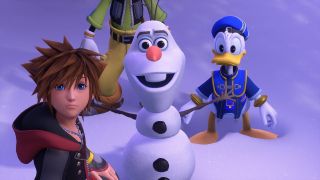 If you're going to sprinkle some Tinkerbell dust over your Kingdom Hearts 3 game full of Disney characters, you may as well go all out when it comes to casting voice actors. The Kingdom Hearts series has always had The Sixth Sense star Haley Joel Osment as Sora, but this year it's adding famous faces (or at least vocal chords) from Frozen, Toy Story, Pirates of the Caribbean, and more.

Kingdom Hearts 3 won't be out until January 29, 2019, but my inner child is already at puking levels of excitement over the chance to explore the worlds of Toy Story and Frozen, especially if the powerful lungs that gave us 'Let It Go' are involved. As well as Frozen's Arendelle and the Toy Story toy box, Sora, Goofy, and Donald Duck will visit such fantastical locales as Tangled's Kingdom of Corona, Big Hero 6's San Fransokyo, and Monstropolis from Monsters Inc.

Check out our preview of Kingdom Hearts 3 to find out why it plays, looks, and sounds just like you hoped it would.