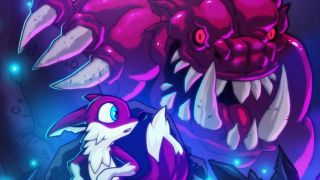 Everybody knows the story of Shovel Knight by now - a nostalgic throwback to the days when you could count a character's pixels on one hand and lightning-fast reflexes were all you needed to save the princess. But what made Shovel Knight stand out in a sea of like-minded games was that it was true to the time period it was shaped by. For example, developer Yacht Club Games limited itself to the NES' color palette, and the user interface is actually a background layer of graphics being displayed, not an overlay like it would be in modern games.

But now, developer Matt Phillips has created something that might go even further than Shovel Knight in presenting an authentic retro experience: a brand-new game called Tanglewood, now available for... Sega Genesis (Sega Mega Drive as it was known outside North America).

True to form, for better or worse

In Tanglewood, you play as a small fox separated from its family. You'll run, jump, avoid predators, and solve puzzles to reach the safety of your den in a world described as "a mix of the Mega Drive titles Another World and The Lion King." In other words, Tanglewood is to the Genesis / Mega Drive what Shovel Knight was to the NES.

Now, to be clear, Yacht Club Games is a studio made up of multiple people, and Shovel Knight was successfully Kickstarted to the tune of more than $300k. Phillips (while an experienced developer) is just one person who made Tanglewood after a much smaller-scale Kickstarter. So in terms of scale and precision, Tanglewood is not on par with Shovel Knight - and even Shovel Knight itself breaks away from the limitations of the NES in some respects.

But it's how Tanglewood was created that makes it interesting and more authentic to an era when we still cared about bits. Phillips didn't use modern trickery to make Tanglewood look like a Genesis / Mega Drive game - it is a Genesis / Mega Drive Game. Phillips used an actual Mega Drive dev kit, running on a Windows 95 PC, to code the game, and worked within the system's memory limits to make it as authentic as possible. And yes, there were technical breakdowns. A lot of them.

"I've had more repairs on this thing than I can count," Phillips told the BBC in a recent interview. Another thing that's gone defunct? Sega's own QA testing. Phillips said he approached Sega to see if the company would be interested in officially licensing the game, but the company flat-out doesn't have the processes for quality assurance on Genesis / Mega Drive games anymore.

How to get your copy

If it sounds like Tanglewood's development was a headache, its physical production is even more daunting. Phillips, who lives in the UK, partnered with a Chinese manufacturer to create the molding for Tangelwood's cartridges, while an unnamed partner in Canada helped produce the actual circuit boards. It's really a worldwide collaboration, helmed by one guy who just wanted to challenge himself to work within old system constraints.

If you've still got a functioning Genesis / Mega Drive (and a TV you can hook it up to), you can pre-order a physical copy that will play on your system just like any other game from the 90s for £54. Phillips expects to begin shipping copies in June. If you don't have a classic-style setup but would like to, check out our beginner's guide to setting up a retro hub.

If you'd rather not bother but are still interested in Tanglewood, just be patient: Phillips says he'll be porting the game to modern PCs in the near future (and you can download a demo right now).