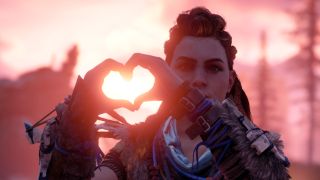 Horizon Zero Dawn is full of memorable characters, Instagrammable vistas, and dangerous dino-bots who want to chomp you up even when you'd rather just enjoy the first two things. Fear no more, non-battle-likers: the latest update for Horizon (patch 1.32) gives you the option to dull those robo-teeth in the new Story Mode difficulty setting.

You'll still have to fight to get through Horizon's story and world but combat will be much easier: Aloy will dish out substantially more damage and receive less in return. It's great for inexperienced players or for folks who just don't enjoy the combat very much, since you'll be free to spend more of the game doing the things you actually like. Also, it cements Horizon as the de facto choice for demoing PS4 Pro and 4K/HDR. It really sucks getting torn to shreds by a thunderjaw when you're just trying to show your non-gamer friends all those vibrant colors.

Adding Story Mode is a great move and I only wish Guerrilla Games had made this new difficulty mode sooner, since Horizon has been out since February (it also received a new extra-tough Ultra Hard mode last month). Still, new players should have enough time to get through Story Mode or whatever difficulty setting they prefer before Horizon Zero Dawn's The Frozen Wilds DLC expansion arrives on November 7.

Once you're finished chilling out with Aloy, check out our list of the best PS4 games for more stuff to play (spoiler: Horizon's on there, so you've already got a good start).