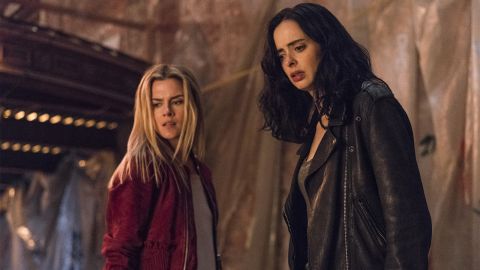 A fitting send off for Krysten Ritter's Jessica Jones, although it fails to replicate the tension and drama of the first season.

"We only have a few hours to live up to this hero shit," says Jessica Jones halfway through her third season. Talk about an on the-nose comment: for its final outing (on Netflix, at least), showrunner Melissa Rosenberg's Marvel adaptation faces the task of providing a send-off for both the streaming Marvel-verse and Jones' run itself.

After two seasons of grappling with her past, we find Krysten Ritter’s Jones torn between saviour and cynic as she faces her future. In her doubts about heroism, Jones' hard-bitten introspection contrasts sharply with adoptive sister Trish's (Rachael Taylor) hunger to flex her new powers.

Elsewhere, Jones' exchanges with a new lover stretch our interest in burger-based banter while we await some new threat to galvanise the plot. When he arrives, Jeremy Bobb's killer Gregory Salinger is a mixed bag of fruitcake. True, his attempt to portray himself as a "single white male" target for Jones' "feminist vindicator" anger introduces of-the-moment themes from the noxious 'manosphere'. Yet his supposedly Lecter-ish intelligence never fully registers, leaving a whiff of over-familiarity after the monstrous Kilgrave and multi-layered Alisa.

As the plot settles into a holding pattern of legal wranglings, Ritter's mordant charisma lacks anything properly challenging to bounce off. Yet just when you think this is a series in need of a shock jolt, Jessica Jones season 3 suddenly puts itself in a strong position to pay off its promises. Sadly, the promises of Jones' sibling Marvel spin-offs are now in doubt after Netflix’s blanket cancellation. True, few of the six titles were without issues. If Iron Fist was too slow and silly, the team-up of Fist, Jones, Luke Cage and Daredevil in The Defenders mistook dour for deep, even managing to make back-from-the-dead ninjas dreary.

But if the sense of wasted potential rankled, TV's Marvel-verse did score some wins, often with movie-grade casting calls. Though over-long, Iron Fist 2 improved on its first season thanks to Alice Eve's Typhoid Mary and Sacha Dhawan's intense Davos. Jon Bernthal gave us the best screen Frank Castle yet in The Punisher, while Luke Cage season 1 banked a corking coup with Mahershala Ali’s Cottonmouth.

Even The Defenders had Sigourney Weaver on side, though she was squandered too soon. Janet McTeer and David Tennant brought psychological depth in Jessica Jones, though it was Netflix's first Marvel outing that ruled the roster. Proving a TV show could out-punch a patchy film, Daredevil banked killer turns (Cox, D'Onofrio, Woll, Yung et al) before bowing out on a high with the electric fights and crime-story density of Season 3. The stinger made Season 4 seem a shoo-in.

Will a new streaming service bite? Tough to say, though in the meantime you can perhaps see the Marvel-verse’s legacy evolving in Disney+'s Star Wars MCU spin-off plans. As The Mandalorian and more beckon, the 'Devil and Ms Jones – at least – have set high standards for movie-grade franchise TV to live up to.

A fitting send off for Krysten Ritter's Jessica Jones, although it fails to replicate the tension and drama of the first season.