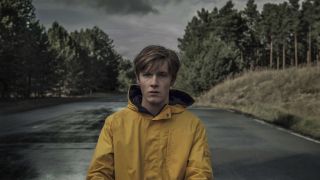 I’m a sucker for a foreign-language binge-athon, and Netflix’s Dark looks like it’ll be another to add to your ever-growing Netflix list.. If you thought the German language was going to be the most confusing thing to keep track of in this Stranger Things-meets-timey-wimey horror mystery then, hoo boy, the trailer will blow you away. There’s even a 2017 release date, so get ready to mark your calendars.

Let’s get the simple, easy facts out of the way first. The release date: December 1, 2017. We’ve already gotten a teaser trailer but, fantastically, the second teaser is even more confusing than the first. Now, the trailer…You might have to watch it half-a-dozen times. Don’t worry, I’ll wait.

I think (think being the operative word here, I really don’t know what’s going on) the story centres around the disappearance of two young children in the fictional town of Winden, Germany.

That’s about as straightforward as it gets, though. The trailer is punctuated by phrases stating ‘The question is not who/how/where’ but when. So expect a whole bunch of Lost-style flashbacks/flashforwards to whet your convoluted timeline appetites.

Not only that, the menacing man repeating ‘tick tock’ seems to be our villain – who locks one of the boys in a blinding torture advice (hence the ‘Dark’ of the title?) and he’s an outstandingly creepy one at that.

Is this going to be your next favourite Netflix show? It’s early days yet, but the blend of absurdist Twin Peaks imagery, Stranger Things-style mystery, and an ominously evil villain that might rival Pennywise in the hide-behind-your-sofa stakes can only bode well for the series.