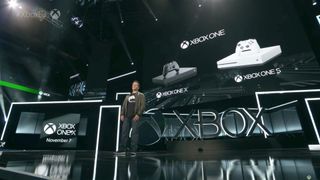 The next console from Microsoft finally got an official name at the Xbox E3 2017 press conference: Xbox One X. It's not quite a palindrome - you know, something that's spelled the same backwards as it is forwards - but it's close, and the internet had some pretty amusing reactions to the official title. Take a look.

And here's a bonus from our very own Iain Wilson.

Read up on our E3 2017 schedule to make sure you don't miss any announcements, and check out our E3 2017 trailers page to see all of the best videos in one place.