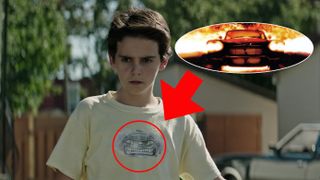 So now you know exactly what floats in the sewers of Derry. You’ve seen the It movie and the horrors that await not just beneath the streets but in the bathrooms, libraries, and old derelict houses of Stephen King’s cursed town. Before I dive into what you might have missed the midst of all the scares though - don’t worry, I’m keeping my mouth firmly shut - it’s worth warning you that here be spoilers for both the movie and the book, and (probably) the second movie when it comes out.

If you haven’t already braved the trip and still want to go in cold, add this to your favourites and read on your way home. For those who have already acquainted themselves with the brilliant Loser’s Club however, here’s a breakdown of the little details hidden amongst the balloons, frilly sleeves, and terrifying clown dolls. It turns out that there’s plenty of King Easter eggs if you just know where to look. No, really, you can look now…

1. All that talk of turtles is no accident

For those who haven’t read the book, Ben Hanscom ducking under the water of the lake after spotting a turtle might seem like an added moment of childlike innocence in probably the happiest scene in the movie. While it is that, it’s also a clear indication that It director Andy Muschietti isn’t ignoring the lore of a Turtle known as Maturin, an ancient mystical entity and adversary of the creature known as It. In the book, Maturin gives advice to the Losers about how to beat It, and while there’s no ritual at work at the end of the movie, Muschietti is making sure we know that turtles are definitely a theme. Just to make doubly sure, when Bill enters Georgie’s room in the middle of the night, he picks up what looks like a Lego turtle and drops it when he hears a noise outside the room. It’s a smart way to reference the creature without going into any of the deep and complicated lore that’s further explained in King’s Dark Tower books.

Ah, poor Stan. Probably the least keen member of the Loser’s Club, Stanley Uris comes along for the terrifying ride almost in spite of himself. He’s the one who doesn’t want to enter the house on Neibolt Street. He’s the one standing at the entrance to the sewers unwilling to join his friends and, while Eddie is initially the same, Stan doesn’t learn to be brave like his fellow Losers. Stan never truly overcomes his fears of It and unfortunately, as the first one to quickly leave the group promise circle as the Losers swear to return to Derry if It comes back, he seals his fate. Taking place 27 years later as the town falls to the creature once again, Chapter 2 will probably start with Mike Hanlon calling each one of the Losers to come back. Horribly, Stan has never truly faced his fears and rather than return, he takes a razor blade to his wrists in a bath. When it comes to Stan, unfortunately It wins. Yeah. Grim.

On a slightly happier note - RIP Stan - you might have clocked Eddie Kasprak’s T-shirt during the scene in the street before the Losers head to look at the Derry sewer map. It’s still perfectly in keeping with the ‘80s-osity of the piece but Eddie’s tee proudly displays a murderous car with giant pointy teeth. It’s probably not quite a coincidence then that Stephen King wrote Christine, a book all about a, well, murderous car. Sure there’s no pointy teeth involved but Christine does have glowing green eyes at one stage and brutally murders every member of a gang who destroyed her paintwork. Think the car equivalent of John Wick and you’re in.

While the Loser’s Club getting together anywhere that’s not pitch back and full of clowns is surely a cause to celebrate, the scene where the team gathers beneath Derry’s Paul Bunyan hints at a scare we just didn’t get to see in the movie. A very real statue in Bangor in Maine, the jolly 31ft Bunyan with an axe over his shoulder becomes nightmare fuel in the book when Richie has a rest on a bench near the statue when being chased by bullies. The statue comes to life, creaking off its plinth, and chasing him down the street with the axe. It’s easy to see why this wasn’t added to the movie given that it might have just looked comedic rather than terrifying but, like the giant hedge animals scene in the book of the Shining, it’s a perfect scare in the book and another way Stephen King makes even the most innocent parts of the outside world truly terrifying.

5. The Deadlights are real

Ok, admit it, that bit where It opened it’s seriously toothy mouth to reveal a gaping maw with swirling lights inside was a bit weird. It was also an incredible reference to another dimension called the Deadlights where It actually resides. Yep, if you were wondering where he goes for those 27 years, it’s not the side of a pool in a Hellmouth sunning himself and drinking Bloody Marys. Rather than a clown, or a leper, or headless burning child - *shudder* - It is actually a mythical creature. This unhinging of It’s jaws showed exactly how Pennywise is just a conduit, a puppet of a more magical being.  Only mentioned in the book, the Deadlights are exactly as you saw in the movie; a series of orange writhing lights outside of our realm and where It lives.

It’s also interesting to note here that Bev actually saw the Deadlights, which was what sent her into her trance that Ben eventually kissed her out of. Previously, the only person to survive actually seeing the Deadlights has been Bill’s wife Audra but thankfully now we can add Bev to the list.

The postcard that Ben sends Bev with all that loveliness about January embers isn’t exactly the stuff that dreams are made of. Sure, one side has Ben’s message - awww - but on the other? That’s Derry Standpipe, water tower and location of multiple child deaths through the years in the book. Once upon a time it was open to the public to get a view from the top. It was quickly closed when children started losing their lives in the cold depths. I would insert a joke about floating here but it’s just too grim. Not directly It movie related but you’ll also find the Standpipe in King books Dreamcatcher and 11/22/63 where there are direct references to Pennywise

Oh hello more grim book references. When Patrick Hocksetter makes his way into the sewers to hunt for the Losers but finds a far nastier surprise lurking in there, he sees a balloon floating towards him. This particular red balloon isn’t just scary because it pops to reveal Pennywise but fans of the book will clock the words ‘I heart Derry’ before it bursts. This is probably a reference to one of the first victims in the book to fall prey to It. A young gay man called Adrian Mellon is attacked by small minded Derry citizens after proudly wearing a ridiculous ‘I heart Derry’ hat, complete with a flower. After the Derry gang members throw him over a bridge, Mellon is actually alright but it’s when Pennywise bites into him and drags him into the sewers that things get seriously nasty. Ouch.